Kevin McCarthy Has Had Enough of Madison Cawthorn 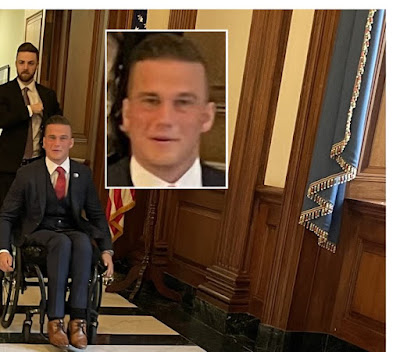 Implicating fellow Republican Congesspersons as sex-orgy-attending deviants is the line you apparently don't cross in Washington, and Madison Cawthorn crossed it. So Republican Majority Leader Kevin McCarthy ordered Cawthorn into his office for an official paddling. And Cawthorn showed up. The photo of his leaving McCarthy's office yesterday suggests to some observers that the 26-year-old had been crying.

The backlash [against Cawthorn had been] remarkably swift. There was even talk about kicking Cawthorn out of the conservative House Freedom Caucus. Multiple members suggested publicly that a reprimand and an apology would be insufficient, and that Cawthorn needed to get specific if he was going to tell salacious tales.

“You should have to name names if you are going to go make those kinds of brushstroke accusations and impugn the character of people in this institution or … anybody else in this town,” an anonymous Republican told Politico. (Aaron Blake, reporting in the WashPost)

Sounding like the scourge of God Himself, Rep. Steve Womack (R-Ark.) said, “He’ll need to be careful, because eventually he’ll be judged.”

Womack even alluded to wanting Cawthorn out, as in out of office: “If it’s: ‘Hey, don’t do that, again,’ we’ve been there. Frankly, if western North Carolina is not going to fix the problem, then leadership will have to.”
If western North Carolina is not going to fix the problem ... like, in the upcoming May 17th Republican primary, where Republican state lawmaker and primary challenger Chuck Edwards (only one of many in the primary) has earned himself the endorsement of both Phil Berger and Tim Moore (who are headlining a fundraiser for Edwards), along with Sen. Thom Tillis's endorsement. If Republicans coalesce around a single challenger in the 11th CD, they can indeed "fix the problem" of Madison Cawthorn (an outcome I've never much believed could happen but which is looking more likely).
Posted by J.W. Williamson at 3/31/2022 07:00:00 AM
Email ThisBlogThis!Share to TwitterShare to FacebookShare to Pinterest
Labels: Chuck Edwards, Kevin McCarthy, Madison Cawthorn