The Winner of This Democratic Primary Will Take the Seat

...because there's no Republican running for the House District 44 in Cumberland County (Fayetteville). It's that safe a seat for Democrats. The district is 43.8% Black, and the primary contest will pit the Black candidate who ran before in 2020, and got a respectable 47.9% of the vote, and a young white lawyer who has worked as an assistant district attorney in Cumberland Co. and is now in private practice.

The current Democratic incumbent in the seat, attorney William O. Richardson, waited until March 1st to announce his retirement. He had served a term in the mid-1990s and was appointed to finish out liberal lion Rick Glazier's term when Glazier stepped down in 2015. Richardson made a name for himself as a strong advocate for public education and alienated others because of his willingness to work with the Republicans. He was one of the very few Democrats given a committee chairmanship. Richardson said in a news release the reasons for his decision “are several and mostly private” but largely focus on the sacrifices his family and work colleagues have made for him to serve. 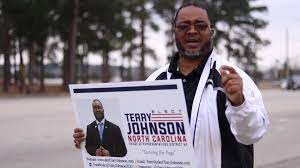 During that 2020 primary race against incumbent William Richardson (which Johnson came close to winning) he made allegations practically on the eve of the election that he had been offered a $12,500 bribe to drop out of the race by a person connected to Richardson. Johnson alleged in a complaint to the State Board of Elections (SBOE) that the offer of money came from a political contractor who worked for Richardson. Johnson and the contractor talked during a 90-minute dinner meeting at a local restaurant. Both the contractor and Richardson proclaimed the accusation absurd, and the investigator for the SBOE concluded, “Based on the facts presented, we do not see a violation of election or campaign finance laws.”

He appears to be the owner of Terry Johnson Funeral Services in Fayetteville, though that business isn't mentioned on his website nor on his Facebook page. 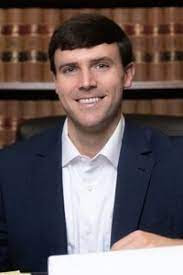 Smith, a native of Fayetteville, attended Emory and Henry College near Abington, Va., on a basketball scholarship. After graduation there, he received his law degree from UNC and became an assistant prosecutor in the Cumberland County district attorney's office. After several years in the DA's office, he entered private practice with the Charleston Group, a Fayetteville firm. "While working for The Charleston Group, I have gained experience representing a variety of government entities, as well as experience in administrative law, corporate law, and general civil litigation. As an attorney that has handled criminal and civil cases, I have relevant experience interpreting, applying, and arguing statutes that our legislators enact and approve" (charlessmithfornc.com).

In 2020, Smith was one of five lawyers recommended to Gov. Cooper for filling a vacant district court seat.

Posted by J.W. Williamson at 3/22/2022 09:48:00 AM
Email ThisBlogThis!Share to TwitterShare to FacebookShare to Pinterest
Labels: Charles Smith, Terry L. Johnson