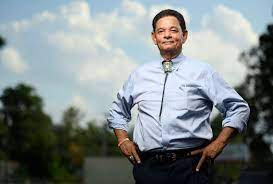 NC House Rep. (Lumberton) Charles Graham announced a full year ago that he would be challenging U.S. Rep. Dan Bishop in what was then the 9th CD. That plan got scrambled by multiple map redrawings. Dan Bishop is now running in the 8th CD, and Graham's home county of Robeson is now in the 7th, where Republican David Rouzer is the incumbent.

When I checked yesterday morning, Graham still had not filed anywhere -- a let-down because he had made himself somewhat famous last October with a campaign launch (still in the 9th) that included a really smashing video biography titled "The Battle for Hayes Pond." That video got some viral play and led to a money-raising bonanza. Jeffrey Billman referred to Graham as "the new progressive darling."

Dan Bishop, dragging a personal steamer trunk of racist history, was going to make a worthwhile target for Graham. Will David Rouzer, a much more low-key if not outright anonymous conservative congressman, serve as well? Because late yesterday Graham filed to run against Rouzer in the 7th where there are already three other Democrats on the primary ballot.

Rouzer is low-profile when compared to other North Carolina conservatives. A few things stick out like a smashed thumb. While in the NC General Assembly, he was a proponent of outlawing scientific talk of sea-level rise. After he was elected to Congress, he wanted to repeal the Affordable Care Act. Early in 2021 he voted with other Trumpists to overturn the 2020 elections, and then he voted against the American Rescue Plan which brought $35 million in pandemic relief to his own district.

What gave Charles Graham great pause before filing was likely the partisan lean of the new 7th. It's now considered "safe Republican." But the new district does have a minority population of some 35%, a large proportion of which -- I'm willing to bet -- are unregistered and unengaged from politics, and Charles Graham might be the candidate to ignite them like no other.

Posted by J.W. Williamson at 3/04/2022 08:41:00 AM
Email ThisBlogThis!Share to TwitterShare to FacebookShare to Pinterest
Labels: Charles Graham, David Rouzer