Update on Candidate Filings: Cawthorn Back in the 11th

Madison Cawthorn moved his candidate filing from the 13th (old news) back to his original stomping grounds. He has a bunch of primary opponents, but so far, no Michele Woodhouse, though if you look at her Facebook page you'd see her running hard for darling of CPAC. She has until this Friday at noon to get her name on the ballot.

Whether or not Woodhouse gets in, the odds are still tilted in Cawthorn's favor, since the anti-Cawthorn vote is going to be split up among at least five others. Unless Cawthorn can't get to 30% of the primary vote and he has to face just one of those Republican challengers in a run-off.

Incidentally, the challenge to Cawthorn's eligibility went away when the new map was adopted, because his challengers no longer live in the affected district. Remains to be seen whether voters in the new 11th CD will refile the challenge based on the insurrection clause in the 14th Amendment.

Meanwhile, Madam Virginia Foxx has two Republican primary challengers -- Michael Ackerman, who's been a leader in the anti-masking show of force in front of the Watauga School Board; and Adina Safta (photo below), who actually lives in Raleigh. What's her deal? So far as I can tell, she has no campaign presence on Twitter or Facebook, no campaign website that I can find, and she wasted her opportunity on Ballotpedia, responding to their candidate survey questionnaire while managing to say precisely nothing of substance. She does use the word "freedom" a lot. 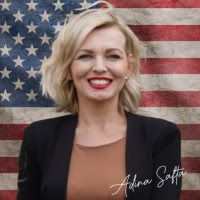 Text from @NC14Woodhouse campaign: "Michele, the America First 11th District candidate, now has the old country club establishment on one side, and the Instagram broken promises politician on the other." She & Cawthorn were aligned. #NC11 GOP primary will be interesting. #ncpol

So she's not about to step aside for "the instagram broken promises politician" Cawthorn. Cool.