Thom Tillis Has Had Enough of Madison Cawthorn 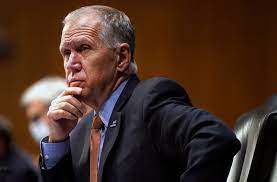 Congressman Madison Cawthorn said some new things on camera the other day.

Tillis adds: “I thought it was a silly statement and it’s not the first one.” Is Cawthorn a problem? “At the end of the day, people in the district are going to have to vote for him and I would ask them to look at his record and ask what has he done since he’s been here.”

Tillis: “What is his track record of working on tough issues and what’s he done for the western part of the state.” Asked for his assessment whether Cawthorn had accomplished much in his first term, Tillis said, “Not a lot in my opinion.”

Posted by J.W. Williamson at 3/30/2022 06:56:00 AM
Email ThisBlogThis!Share to TwitterShare to FacebookShare to Pinterest
Labels: Madison Cawthorn, Thom Tillis