The Elections of March: US House NC6


A First Look at what is likely a Democratic pickup next November. The winner of this Dems primary will likely be the next congressperson in DeeCee, representing all of Guilford and the most urban part of Forsyth. Greensboro and Winston-Salem -- together at last! 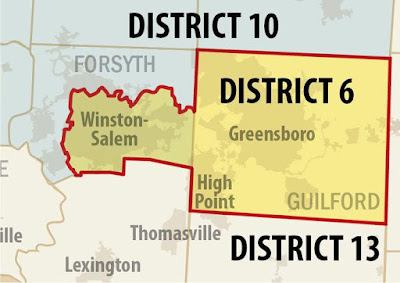 Democrats on the ballot March 3rd:

Bruce Davis, High Point, 62 years old, born in 1957, Baby Boomer, African-American. Perennial candidate: Going back to 2010 and 2012, he tried twice to oust Democratic NC Senator Gladys Robinson from her seat in NCS28. In 2014, he ran unsuccessfully in the primary for the old 6th Congressional District. But in 2016, Davis finally won a race -- in a crowded Democratic primary in the old CD13, he won the privilege to go up against newcomer Republican Ted Budd. Davis lost to Budd in the General, while taking a respectable 156,000 votes to Budd's 199,000. Then in 2019, he ran third in the non-partisan 2019 primary for mayor of High Point.

Rhonda Foxx, Greensboro, 37 years old, born in 1983, Millennial, African-American. First-time candidate. 2008 graduate of George Washington University Law School. Subsequently a rising attorney and congressional staffer in Washington, D.C. Until recently chief of staff to Congresswoman Alma Adams. The founder of the Black Women’s Congressional Alliance, a caucus of 175 black women working on Capitol Hill. BA from UNC-Chapel Hill. (Curiously, for such a political professional, Foxx's web presence is next to nil. An underdeveloped Facebook page. An underdeveloped Twitter account. That's all I find.)

Ed Hanes Jr., Winston-Salem, 47 years old, born in 1973, Gen-X-er, African-American. Represented District 72 in the NCHouse, 2013 to August 2018, when he resigned suddenly while under a cloud for campaign finance violations. He insisted that Winston-Salem city councilman Derwin L. Montgomery be appointed to his unexpired term in the NCHouse.