The Elections of March: This Open NC Senate District Earns the Prize -- "Most Interesting DemPrimary of 2020"

Because incumbent Democratic Senator Floyd McKissick is stepping down to take an appointment on the state's Utilities Commission, several Democratic hopefuls are competing for McKissick's safe seat. (Bitzer rates it "Likely Democratic.") The winner of this primary will be the heavy favorite to take the seat next November, though there is also a Republican in the race. 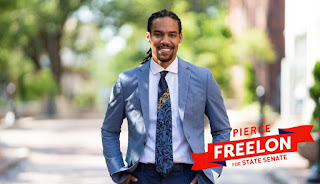 Democrat Pierce Freelon is a 36-year-old millennial born in 1983, and he's been a rising star in both Durham activism (he ran for mayor in 2017 as a write-in and got 11%) and in the burgeoning black music and arts movement. He has his own YouTube channel, is a musician and a filmmaker, and he wields a pretty irresistible charm (watch his keynote speech, "Speak Your Truth," in honor of Martin Luther King Jr.) that can get him several leagues down the political road before older, duller politicians can get their sneakers tied. He's been an inspirational community activist and organizer. He created Blackspace, a kind of media lab and after-school for black kids in Durham -- "an Afrofuturism digital makerspace .... We offer local teens free WokeShops in the digital and creative arts, including videography, electronic music production, spoken word poetry, puppetry, coding and 3D printing." (Those who know the history and influence of AppalShop in Whitesburg, Ky., will recognize a parallel undertaking in Blackspace. Pierce Freelon is the creative genius and entrepreneur behind it, much like Bill Richardson was the sparkplug that lit AppalShop.) Freelon also started something called "Beat Making Lab," an Emmy Award-winning community music program sponsored by Apple Inc., and another after-school program, Spoken Justice, a hip-hop and spoken word teen workshop that has served both Durham Public Schools and the local crime-prevention council. He's a blessing to the community and he clearly benefited from a blessed upbringing. According to his Wikipedia page, "He is the son of Grammy nominee Nnenna Freelon and architect Philip Freelon" (the latter who incidentally designed the Smithsonian's National Museum of African American History in DeeCee, among others).

Pierce says he was inspired to run for state office "while he and his mother served as his father’s caregivers before he passed away. He says that although the debilitating illness had paralyzed his father physically, his mind remained sharp. Phil Freelon died at the age of sixty-six on July 9 after a three-year struggle with ALS. His son says he’s also running for State Senate because he promised his father that he would fight to ensure all state residents have access to health care" (Thomasi McDonald).

Much more could be written about Pierce and the Freelon legacy. The Indy Week recently named him one of its "19 People of 2019." Google his name and you'll see more. If he wins this primary, he could become a mover-and-shaker in the General Assembly, if he can stand the tedium of deal-making.


Democrat Natalie Murdock is a year younger than Pierce Freelon and began to get very active with the Durham Democratic Party in the early months of 2018, attending both her precinct meeting and the county convention, where she was elected a delegate to both the district and the state Democratic Party conventions in 2018. She stayed very active into 2019 and was elected a Durham representative on the NCDems State Executive Committee. So she's been building a new base in the Democratic Party power structure. (Freelon's base is less connected to political powerlines. More untacked-down.)


2018 was significant for Murdock in another way. It was her first year on a ballot, and she was noticeably successful. She ran (one of four) in the nonpartisan race for Durham Soil and Water District Supervisor and was the top vote-getter with 84,151 votes. I'll chalk that up to party connections, at least in part, because Murdock's history with and knowledge of farming, which is what the supervisor's role requires, seems tenuous. According to her web biography, "I began my professional career working with Chris Kromm at the Institute for Southern Studies right here in Durham. Then, at the City of Asheville Economic Development Office and Advantage West Economic Development Group" -- a steppingstone to the Land-of-Sky Regional Council, working on urban and rural transportation projects ("Most notably," she says "this includes the I-26 highway project, City of Asheville transit plan, and the local Metropolitan Planning Organization and Rural Planning Organization," which appears to have taken her next to Durham and to GoTriangle Regional Transit Agency, where she worked for Deborah Ross and got her first taste of politics. She says she worked as "traveling press secretary" for Deborah Ross in her US Senate campaign of 2016 and then took a job briefly with Attorney General Josh Stein as a deputy director of communications. From there she started her own consulting group, Murdock and Anderson, which helps design and implement community affairs projects for independent agencies and non-profits.

She may have brushed shoulders at some point with some iteration of "farming" in that job history, but Soil and Water District Supervisor looks mainly effective for quickly getting a local name in order to run for higher office.

She may give Pierce Freelon a real run for his money.

Democrat Gray Ellis is a 47-year-old Gen-Xer who has been willingly singled out for a unique distinction: He was recently front-paged by the Raleigh News and Observer as a state pioneer, as one of two transgender candidates for the NC General Assembly in 2020. (The other, Angela Bridgman of Wake, has also been profiled on this blog.) Ellis is owner and managing partner of Ellis Family Law in Durham. He's board certified in family law by the North Carolina State Bar Board of Legal Specialization, a distinction shared by only 1.1% of the 24,000 attorneys in North Carolina. Educated as a undergraduate at NCSU and through the NC Central School of Law, he has 17 years of practice. 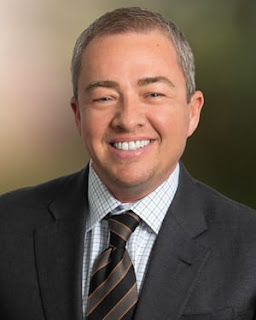 “I’ve lived in Durham for 20 years, and been in a safe environment that’s very accepting of me. ... I’ve been fortunate, but I know that’s not true for most trans people,” he said. “I think it’s right and it’s time for [transgender people] to have a seat at the table. We’re completely unrepresented.” He cited his law career and his desire to serve people directly — rather than being a career politician — as among his strengths. He called the state’s passage of HB2 “horrifying.”

The problems with health-care delivery in North Carolina will animate his campaign: “We must expand Medicaid coverage to cover more people who are uncovered or only have partial coverage for mental health disorders and ensure that insurance carriers in North Carolina are compliant with the law of parity, requiring that mental and physical health be covered in the same way,” Ellis told the News and Observer.

Ellis is so far seriously trailing both Freelon and Murdock with campaign infrastructure. As far as I can find, he only has a (somewhat eccentric) Facebook page, which is more personal blog than campaign site: "The Real Tales of the Campaign Trail -- Gray Ellis for NC Senate." He says that he has "identified his campaign, campaign finance, and social media managers," but so far we're not seeing the full panoply of their work.

Republican John Tarantino will also be on the ballot in November. He's a 63-year-old Boomer (born in 1957) and a perennial candidate for a variety of offices, including (once before, according to Ballotpedia -- which I haven't been able to independently verify) Senate District 20 when he supposedly ran in the Republican primary for that seat in 2010. Ran again in 2015 and 2017 for seats on the Durham City Council -- all unsuccessful forays. He calls himself a social moderate on his Facebook page.