Gen-Z Is Coming For You, Thom Tillis!


Voting by university students in North Carolina is going to go up soar in 2020. They've got a high fever for participating this year because they hate the direction we've taken. They've been paying increasing attention, and they know shit from Shinola. So you got trouble, Thom Tillis. Maybe not now, but soon, and for the rest of your life.

Interest runs high for his March's primary (and look below at the list of 14 Early Voting Election sites on college campuses starting February 13). Most of Gen-Z will be voting the Democratic ballot, particularly the presidential race. The vast majority won't even see Thom Tillis's name. They'll see the names of Tillis's would-be Democratic opponent, and they'll pick the winner. Come November, Tillis will be in their line of sight, and I think Gen-Z will not be done with voting yet. 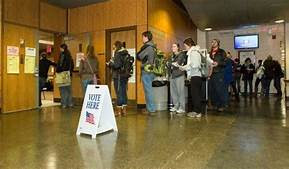 1. AppState led the way after the 2012 Republican takeover of our election machinery by fighting for on-campus voting rights. In 2020, the Plemmons Student Union will again host Early Voting from February 13 through February 29, the entire period mandated by law. New registrations on campus are reportedly already running high. Deadline to register for the March 3rd primary: February 7.

2. UNC-Chapel Hill. The Daily Tar Heel reports that whereas the UNC campus was previously divided between five different precincts, with far-flung and difficult-to-find polling locations, the Orange Board of Elections has consolidated all on-campus student housing into a single mega-precinct with an on-campus E-Day polling place. Early Voting this February, yes, at Chapel of the Cross on East Franklin St., if not exactly in the heart of the campus then at least in its left ventricle.

10. East Carolina University, student union. You got it.


These constitute a wave of sorts.