This was Republican Chuck McGrady's safe district since the elections of 2010. McGrady was often described as a "moderate," though I rarely saw any practical application of his supposed moderation on a House Republican Caucus. He usually voted with his tribe.

When McGrady announced that he would not be running for another term, former House member (District 116) Tim Moffitt fairly leapt at the chance to get back into politics. Moffitt represented District 116 starting in 2010 and was an ambitious little tick who was always into something underhanded. He thought he might be Thom Tillis's natural born replacement as Speaker of the House after Tillis left for Washington. He also thought he could steal Asheville's water supply to privatize it. That scheme didn't go so well, and Moffitt lost his seat in 2014 to Democrat Brian Turner by a thousand votes.

Moffitt has his own primary contest against Dennis Justice, a perennial candidate in Henderson County who's run for Henderson County Commissioner twice, Board of Education three times, Mayor of Fletcher once, and once for the NC Senate in a primary against Tom Apodaca. Moffitt will probably win on March 3 and will then face Democrat Josh Remillard in November in what is considered a "Likely Republican" district.

Remillard also technically has a primary on March 3. I say "technically" because his primary opponent, Danae Aicher, withdrew her candidacy on January 15 -- though not in time to get her name off the ballot. (Aicher had a campaign up and running and looks to have been a very appealing candidate herself.) So though the outcome of the primary is more or less guaranteed in his favor, Remillard still has to go through the motions.

He's going through the motions just like the veteran infantryman he was during two tours in Iraq. He's participated in the LeadNC candidate training and he appears to be all over the place in joint appearances with other local and district-wide candidates from Buncombe and Henderson. Remillard's mountain man persona is going to present a decided contrast to Tim Moffitt's junior-exec-on-the-make vibe. 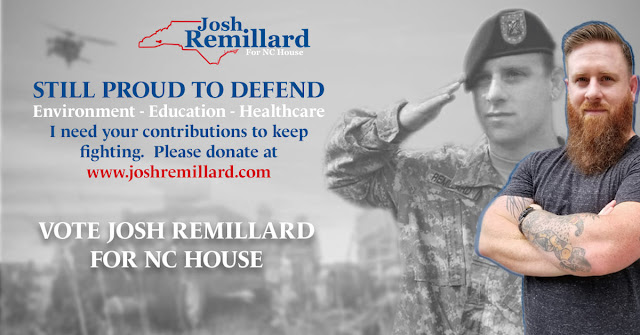