The Body Count -- Eric Chewning, Chief of Staff to SecDef 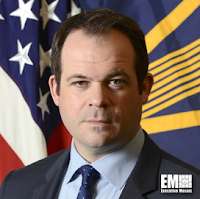 Eric Chewning, chief of staff to Defense Secretary Mark Esper, will step down at the end of this month, his exit apparently accelerated by Trump's latest wild swings against Iran.

Chewning, a former Army intelligence officer and combat veteran, joined the Pentagon in 2017 and was later promoted to chief of staff by then-Defense Secretary Pat Shanahan.

Chewning will return to the private sector where rational decision-making is still practiced.

Posted by J.W. Williamson at 1/06/2020 11:23:00 AM
Email ThisBlogThis!Share to TwitterShare to FacebookShare to Pinterest
Labels: Eric Chewning