I'm Counting on You, Gen-Z 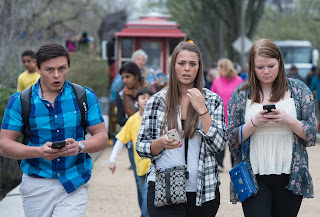 The holy hell the student journalists at the Daily Tar Heel have been raising over the so-called "Silent Sam settlement" is just one more indication that the Baby Boomer Generation in North Carolina has become as moldy and full of worm holes as hundred-year-old Stilton and that our young people are our last best hope for saving us from backsliding into Lost Cause nostalgia. Among other things.

[NOTE: I'm not a Boomer, dammit! I'm older than that, born near the end of the Silent Generation's reign of indifference and smug complacency. I have my own demons.]

In case you don't follow the news out of Orange County, the UNC Board of Governors -- every last one of them a Republican Boomer appointed by the Republican bosses in the General Assembly -- did a secret deal with a white supremacist neo-Confederate group to accept $2.6 million to take the Silent Sam statue off the university's hands.

The Gen-Z journalists at the Daily Tar Heel began looking into that deal and completely scooped all the regular news outlets. What the reporters uncovered is plenty problematic, smelly enough that the Daily Tar Heel is also suing the Board of Governors for violating the state's open meetings law while arriving at their deal with the Sons of Confederate Veterans.

The 18-to-20 year olds now populating our university campuses were born when I was reaching retirement age, and the ones I've known and worked with -- several, and more all the time, because Gen-Z is nothing if it's not politically motivated to pay attention and do something -- give me inordinate hope. They say they are motivated by fear, and I can appreciate that. They've been watching the mess the Boomers created, and they can recognize a tipping point even if their elders can't.

I hear just this morning that more university campuses in this state will have on-campus polling stations this year, just like AppState fought so hard to preserve. That gladdens my heart. Just like the spectacle of the Daily Tar Heel suing the Board of Governors over violating the open meetings law brightens my gloomy day.

Posted by J.W. Williamson at 1/15/2020 11:57:00 AM
Email ThisBlogThis!Share to TwitterShare to FacebookShare to Pinterest
Labels: 2020 Blue Wave, racism, youth vote