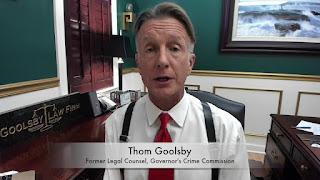 While administrators at UNC fear violence if they force Silent Sam back up on his plinth in the middle of campus (see last item, down-column), some hard-ass Republicans on the Board of Governors relish the idea of actually provoking a little violence, figuring it'll help their conservative brand with the Trumpists. And it would, too.

UNC BOG member Thom Goolsby of Wilmington issued a three-minute video denouncing the cowardice of the Board of Trustees -- to put Sam away in a separate building ... what the Holy Land o' Lakes Christ is that? It takes Goolsby over three minutes, because a two-minute video just wouldn't accommodate the full boil of his outrage.

Put that Civil War-glorifying statue back up on its pedestal at the entrance to campus and dare the hippies and anarchists and eggheads to come tear it down. Beat some pointy heads into a flatter pancake, if you have to, and force those Generation Z children to honor the sacred heritage of the rebellious South. "Clearly the law does not contemplate allowing criminal actors to dictate the placement of historic objects," Goolsby intones, a Cicero with a hard-on for Carthage.

"Goolsby implored people to call each member of the UNC Board of Governors and Board of Trustees demanding Silent Sam’s return to its original place" (WECT). But don't call Thom Goolsby. He's already a lead-pipe cinch for the hard-line. He contributed his bit to getting rid of UNC President Margaret Spellings, and when he was a state senator, he wanted to see executions restarted to thin out the housing on Death Row. Nice guy.

Mr Williamson, this Facebook post from a Professor at UNC sums up the idiocy quite well. https://www.facebook.com/DerrickMatthews/posts/10110884815145013