When You Hear "Thought Police," Better Get Your Hardhat 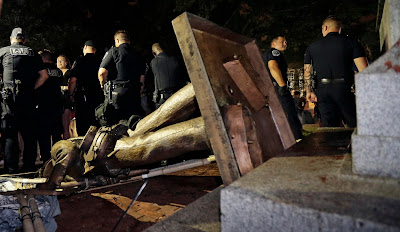 North Carolina Public Radio was reporting late yesterday that some "dozens" of Chapel Hill faculty are organizing a protest against the university's latest plan for getting rid of Silent Sam, that Rorschach Test for white power and "the Lost Cause" that fell on its face back on August 21. UNC Chancellor Carol Folt and her Board of Trustees proposed building a special $6 million "Center" to house Sam, where he can be properly "interpreted." Faculty objected (the faculty assembly voted overwhelmingly against it, in a toothless resolution), but in the main, faculty want the statue saved but put somewhere else, off that campus, like on a Civil War Battlefield or in a famous historic cemetery (others have suggested a hog waste lagoon).

Forget the faculty. Students -- many, many students -- see the plan as a tone-deaf preservation of the imagery (and hence the intent) of white supremacy. So how do faculty, inspired by students, plan to protest? By withholding grades this month at the end of the semester ... until Carol Folt and the Board of Trustees rethink their plan, and recant it. Withhold grades? Big deal? Well, yes, and UNC administrators are warning of "possible legal ramifications, including student lawsuits. Withholding grades could also cause issues for students graduating later this month."

For the big bosses, the overriding issue about returning Silent Sam to campus (al fresco), out in the open where students can gather to protest him, is the potential for violence, like what brought down Sam in August. Any time a student gets hurt on a public campus, you got much larger potential liabilities. So the admin decided to pay the money, build Sam a safe place where crowds can't gather to protest him -- and potentially turn violent -- and hope that manner of hallowing Civil War relics will placate the reactionaries. Sam gets his own reliquary, and maybe in 30 years his shiny bronze rifle will still get dusted.

The new building for Silent Sam was only part of the formal proposal by the UNC Board of Trustees.  Someone smart got quickly to reading "the appendices" to the Silent Sam plan, and that someone was AppState history professor Michael Behrent (hattip MM). What he found is classic over-reaction by rulers -- a proposal for militarizing all the campuses of the UNC system with a swat team -- "a mobile force platoon" is the verbatim language -- of 40 (yes!) specially hired and trained university white hats with batons, arriving ready to restore order.

The Age of Trump: backward to authoritarianism.

Mobile Force Platoon was proposed by a "safety panel," a veritable “who’s who” of prominent police and military officials, who came up with this modest proposal at the request of the Board of Trustees (from Michael Behrent):


“...that the UNC Police acquire greater capabilities in the area of crowd control, protest management and intelligence gathering.” To this end, the panel calls for, as a way of addressing “large protests that involve unlawful behavior,” a “mobile force be developed at the UNC System level (to be shared by all System institutions).”

Would they arrive by helicopter, blowing dust into angry student faces? Or by big black van, an opaque wagon of retribution and backlash?

The item about "intelligence gathering" ought to raise neck-hairs, if not hackles. That means spying and with spying comes provocative incitement, followed by various punishments meant to clamp down on opinion. It's a bad idea.