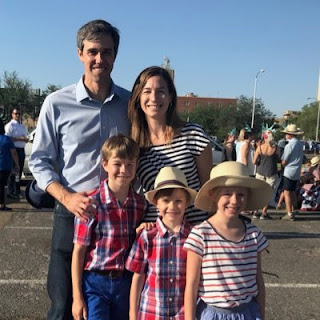 NYTimes gives Beto O'Rourke of Texas the star treatment this morning. If he runs for president, as many expect he will, he'll seriously scramble a whole bunch of fat eggs that are already in other candidates' baskets.

He's a star, no doubt. We liked his chances against Ted Cruz and followed his campaign all year. The fact that he lost -- narrowly -- doesn't seem to have slowed down the presidential boomlet around him, but the Times assesses his other liabilities:


Mr. O’Rourke would surely have vulnerabilities in a primary, including an absence of signature policy feats or a centerpiece issue to date. In his Senate race, he was often disinclined to go negative, frustrating some Democrats who believe he wasted a chance to defeat Mr. Cruz, and he struggled at times in some traditional formats like televised debates. He is, by admission and design, not the political brawler some Democrats might crave against a president they loathe. And his candidacy would not be history-making like Mr. Obama’s nor many of his likely peers’ in the field, in an election when many activists may want a female or nonwhite nominee.

Yes, white male, when there are several alternatives to that demographic who are considering a run, including Kamala Harris. Not a political brawler might be the bigger problem.

Posted by J.W. Williamson at 12/10/2018 08:27:00 AM
Email ThisBlogThis!Share to TwitterShare to FacebookShare to Pinterest
Labels: Beto O'Rourke

All good points but more startling is the fact that Beto's limited success was in turning out dems in Dem areas bot in crossing into red areas. If we are going with an old white guy let's get one that can win in the red States .