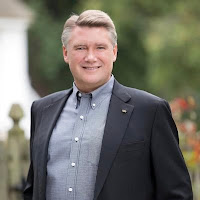 Rev. Mark Harris, who putatively won the 9th Congressional District race on November 6th, is fast becoming an untouchable in North Carolina Republican circles, except maybe with the Christian right (already inured to unethical behavior by "the Lord's anointed"). It's not that unusual in the South for congregations to rally protectively around their pastors accused of hinkiness, but political parties can be brutally realistic.

Harris has been a virtual stone wall, or at least a stone statue, since the absentee ballot fraud scandal erupted in Bladen (and now in adjoining counties too). The first Harris campaign defense appeared to be "it was Red Dome Group that hired Dowless, not us." And "we had no idea what was going on." The Reverend Harris's Twitter feed went dead after December 1. A week later, with more and more reporting on the wrongdoing in Bladen County and on McCrae Dowless and his curious history, Harris finally posted a denial video on his Twitter account on December 7th. It's not on his website, and it hasn't gotten a lot of play.

And by the way, "I was absolutely unaware of any wrong doing." That's a direct quote.

A. According to new reporting in the WashPost, Harris was absolutely and actively aware:


North Carolina congressional candidate Mark Harris (R) directed the hiring of a campaign aide now at the center of an election-fraud investigation, according to three individuals familiar with the campaign, despite warnings that the operative may have used questionable tactics to deliver votes.

Harris sought out the operative, Leslie McCrae Dowless, after losing a 2016 election in which Dowless had helped one of Harris’s opponents win an overwhelming share of the mail-in vote in a key county.

B. Harris's "election" has become such a scandal, the NCGOP is trying to dump his ass. The elections law overhaul that passed through the General Assembly yesterday contains a special provision: If a new election is ordered in the CD-9, then there must also be a primary -- the full shebang, brethren and sistern! And what clearer message could the NCGOP send to Mark Harris? "We're gonna defenestrate you from the priory."

There's already talk about who will run in a Republican primary for the special election that's coming. Robert Pittenger, the incumbent Mark Harris defeated in the May 2018 primary (now also tainted by the scandal), is not saying "no." Pat McCrory's name has come up, but we thought he wanted to be governor again. According to Politico, "Matthew Ridenhour, considered a rising star in the local GOP, is weighing a challenge. The ex-Marine recently served as a Mecklenburg County commissioner but lost reelection last month." Some of the Republican members of the General Assembly who lost their seats in November might have been contenders, and might be anyway.

On the Democratic side, Dan McCready is getting ready for the re-mix. I like his chances.