A Deeper Dive Into Sherrod Brown 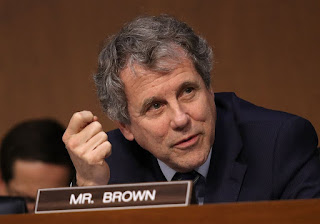 Senator Sherrod Brown's wife Connie Schultz said she thinks her husband should run against DJT in 2020 “because Sherrod’s onto him. Sherrod is who these voters thought Trump was.”

These voters ... Trump Democrats, workers in fading industrial towns, forgotten citizens longing for someone to carry their torch instead of water for Wall Street.

Sherrod Brown has a much longer history than Twitterman of getting his hands dirty fighting free trade deals that dump on working people. While still a member of the US House in 2005, representing the 13th Congressional District of Ohio, Brown led the fight against the Central American Free Trade Agreement (CAFTA), which finally passed by one measly vote despite Sherrod's best efforts. He doesn't mind the label "progressive populist."

He's got intellectual muscle behind his populism (unlike Twitterman). He wrote a book in 2004, Myths of Free Trade, which "provides a front-row seat to the Washington spectacle of corporate lobbying and political intimidation that keeps the free-trade mantra alive as American policy, despite all the evidence of its failure." Brown argued that it was labor activism that built the US middle class, and free trade agreements -- he opposed NAFTA -- have torn the fabric of middle-class prosperity.

Brown has especially criticized free trade with China. In 2011 -- well before Trump started breaking the furniture -- Sherrod co-authored and sponsored a bill that would officially declare China a currency manipulator and require the Department of Commerce to impose countervailing duties on Chinese imports. In January of this year, Brown expressed support for Trump's decision to impose tariffs on washing machine imports.

Brown opposed the 2017 Republican tax bill because it overwhelmingly benefitted the rich and powerful corporations, and he seriously got Senator Orrin Hatch's goat, who also happened to wield the gavel at the time, which gave him the advantage:

Brown was seriously considered for the vice presidential slot by Hillary Clinton in 2016, and there were informed voices urging her to make that choice:


Brown is Bernie [Sanders] without the bombast, a bold progressive voice who understands that the Democratic Party has always stood for the interests of the disenfranchised, disparaged and downtrodden; like Massachusetts Senator Elizabeth Warren, he can articulate the woes and frustrations of the put-upon middle class, and coherently explain how progressive policies can redress those grievances. The selection of Brown could accomplish two mutually important goals for Clinton: he could appeal to the more rational members of Sanders’s fan club while also attracting support from working-class voters who might respond to populist appeals, but who haven’t swallowed the last drop of Donald Trump’s Kool-Aid.

In May of last year Brown published his definition of populism in USA Today. It was also an implicit indictment of Twitterman's divisive bullying:


Populism doesn’t preach hate. Populism preaches hope — hope that all workers will have the opportunity to build better lives for their families....

...populism values work and it respects the people who do it — every last one of them. Our society doesn’t value work the way we once did; Americans work harder and have less to show for it.

If you want to call yourself a populist, you better be ready to stick up for the little guy — whether she punches a time clock or earns tips. Whether she works in a call center or a hospital or on a factory floor. Whether he is a contract worker or a temp.

And you better be willing to be straight with the people you serve. A true populist tells the truth, because she respects people’s intelligence.

Of course we’ve always had cynical politicians. They — and the media that cover them too — often confuse popularity with populism. Populism and popularity may share the same Latin root, but not the same political home. An opportunist politician divides people and kowtows to the powerful. He spreads blame instead of solutions, and lies about bringing back an idyllic past that never was. And he often treats those with less power and privilege with disdain.

(Won't pause here to note that Sherrod Brown values work while our president values golfing and sitting on his big butt watching Fox News and tweeting other peoples' opinions.)

Sherrod Brown has a long history of elective office: eight years in the Ohio House of Reps (and the youngest member elected to that body), eight years as Ohio Secretary of State, 14 years in the US House of Reps, and now recently reelected to his third term in the US Senate. That long string of public offices means lots of individual votes and actions that will be mined for negative details that can be used against him, and he'll be called "a career politician," you can bet!

I think he's got grit, and I don't see him blowing in the wind. Beto O'Rourke's got grit too, but I worry that his recent starring role as Ted Cruz's nemesis may have inflated his ego past his capacity to listen to sage advice. Dunno. We'll find out soon.