This Man Is Dumber'n He Looks 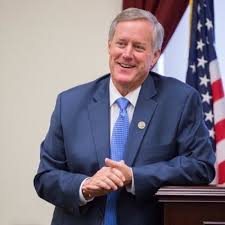 Rep. Mark Meadows (R-NC) issued a statement yesterday saying that “serving as Chief of Staff [to Twitterman] would be an incredible honor.” He's lusting for it but trying to cover his ardor with a bridesmaid's blushing surprise: “It is not something I have been campaigning for,” Meadows told reporters Monday on Capitol Hill, adding that his phone “blew up” after the Ayers news broke. “The president has a good list of candidates. I’m honored to be one of those.”

"The Ayers news." Twitterman had his heart set on Nick Ayers, the 36-year-old political hotshot currently about to exit from his job as Vice President Pence's chief of staff, but Ayers turned down the job. Turned it down flat, making him possibly the smartest man in the current White House. And Trump doesn't have a "plan B" for filling the job. We hear he's frustrated and pissed at Ayers for jilting him.

What would he lose if he took the job? He's chair of the House Freedom Caucus, which means he has some power, although he had more with a Republican Speaker than he'll have with Nancy Pelosi. As Chief of Staff to Twitterman he may imagine he'll have all the power in the world, but he would be mistaken. He will have boarded the bus to Palookaville, as previous chiefs of staff Reince Priebus and  General John Kelly might tell him if he asked.

But he should definitely take the job for the betterment of North Carolina. He'll be out of the House of Representatives and someone else will be appointed to the 11th Congressional District seat. Among the ranks of possible Republican replacements in the 11th is not one normal human being, so it'll be another extremist who'll take the seat temporarily. And then we'll have a special election, and in the Age of Trump, special elections have become one of our favorite forms of entertainment.

Posted by J.W. Williamson at 12/11/2018 10:27:00 AM
Email ThisBlogThis!Share to TwitterShare to FacebookShare to Pinterest
Labels: Donald Trump, Mark Meadows