Year-End Drama in Raleigh (We're Pulling for the Governor, Natch!) 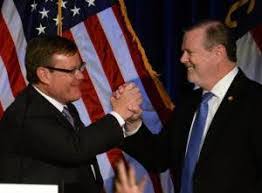 So the Republican bosses in the General Assembly called another special session in Raleigh after the November elections -- their last window of opportunity, because, come January, Governor Roy Cooper will begin having his vetoes sustained.

Berger/Moore called legislators back to town, they said, to enact the legislation for voter photo IDs, but of course they had other mischief in mind. They always do.

The 1st part -- requiring a primary before a special election in the 9th Congressional District -- is already being panned as unconstitutional by a Republican former conservative justice of the NC Supreme Court.

Part 2, returning the elections and ethics boards to their former configuration, bows to court decisions. Berger/Moore had tried jiggering the board of elections to frustrate the governor, but their attempt to take the governor's power was ruled unconstitutional. So under H 1029, the state Board of Elections will return to a 3-2 configuration of Democrats and Republicans, and county boards will also move to 5 members with that same partisan weighting. Ethics will go back to its own corner, separate and apart. So, fine. It's about effing time.

The last part of the bill title above -- "to make other changes" -- contains the turd that offends Governor Cooper and should offend all of us. Berger/Moore want to conceal -- make secret and confidential -- investigations of election law violations committed by members of the their own body of self-dealers, the General Assembly. Say what?


...the section [of H1029] that makes campaign finance investigations private reeks of politicians protecting their own hides. State elections officials tell the Observer editorial board that the bill appears to prevent investigations and their findings from ever becoming public, short of criminal court proceedings. The board conducted more than 200 investigations in 2018. While many of those were minor, many were not, and it appears all, including those in which legislators had to pay a fine (unless it’s appealed), would have been kept secret under this bill. 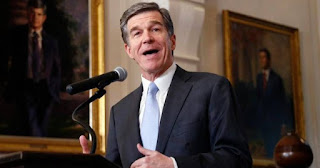 Cooper read that part of the bill and said, "No way." Then at a press conference yesterday, he said, “This bill makes it harder to root out corruption in elections and campaign finance. It actually provides more protections for politicians and others who violate campaign finance laws .... All of these new provisions operate to obscure the truth rather than shine a light on it." The rest of the bill was okay with Cooper. It was that last part: "Fix it this week and I’ll sign it,” Cooper offered. "Otherwise, I'll veto it."


Berger/Moore to Cooper: "So veto it, Bitch!"

The Republicans figured he'd veto, but as long as they have their super-majority, they can override him quicker than a mountain cloudbank overrides Deep Gap. "But just do it now! Chop-chop!" Berger/Moore started screaming, "because ... because Christmas is coming and we all need to go trim our trees." The real reason is the expiration date on their ability to bully, and if they have to come back next week, they may lose members for the override vote (too much nog?), and well, Berger/Moore are just outraged that Cooper might play out his clock on vetoing the damn thing.

All of which made former Republican legislator Charles Jeter chortle: “The NCGA made the decision of the time of year to force these issues, not the Governor. If they didn’t want to come back next week, they should’ve waited until next year. They chose this, not Cooper.”

While he was in the General Assembly and under the big thumb of Berger/Moore, Charles Jeter would never have uttered such a thought. Now he says it out loud. I appreciate the truth of what Jeter said while having little respect for his brand of moral convenience.