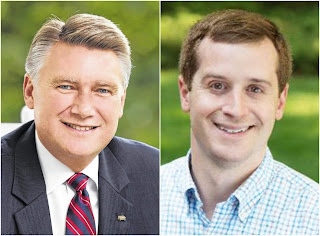 The State Board of Elections has set a Raleigh hearing for 10 a.m. on January 11, 2019, to settle the following election results mainly in Bladen County (one notorious already, the others less so):

The proceedings affect the final certification of results in four contests in the 2018 general election:

(2) Judicial District 16B is in Robeson County. The judgeship there was an open seat. On election night November 6th, Republican Jack Moody Jr. led Democrat Vanessa Burton by 77 votes. Then the provisional ballots were opened, researched, and counted. Burton received 312 votes from those provisional ballots to 149 for Moody. A recount was ordered and conducted. Going into this hearing, Burton leads Moody 15,382 votes to his 15,315.

Burton is an assistant district attorney in Robeson. Moody works as a public defender.

“The [SBOE] did not certify the results of that District Court race, as the apparent margin of victory in that contest represented fewer votes than those under review by this agency as it investigates absentee voting irregularities in the 9th Congressional District,” Patrick Gannon, a state Elections Board spokesman, wrote in an email. “There is not a separate investigation into the District Court contest,” Gannon wrote. “However, the results of the congressional district investigation could have some bearing on that contest.”

(3) The Bladen County Commission District 3 contest was between incumbent Democrat Russell Priest and Republican challenger Wayne Edge. Priest edged Edge 2,401 to 2,167 votes. The SBOE ordered the Bladen BOE not to certify this race, presumably because the winning margin is "within the threshold of the contested ballots" in the Mark Harris-Dan McCready race.

(4) The Bladen Soil and Water Conservation District Supervisor race is technically non-partisan (though we suspect that every man's child in Bladen knows the parties of the contestants). Charles Gillespie is leading Tim Gause by 572 votes. The race was not certified for the same reason as (3) above.

NOTE: The peerless Leslie McCrae Dowless is a Bladen Soil and Water Conservation District Supervisor already -- serving now as vice chair -- having been elected in the (also tainted) 2016 general election.