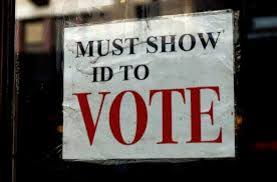 The Republicans (with the help of some Democrats) over-rode Governor Cooper's veto of the voter photo ID bill yesterday, and "within minutes" the Southern Coalition for Social Justice (SCSJ) filed suit in Wake Superior Court to stop it. The group also filed a motion for a temporary injunction to halt the implementation of the law until the merits of the case can be heard.

The SCSJ -- if you don't remember -- also successfully challenged the state’s 2013 voter law which was ultimately struck down by the U.S Court of Appeals for the Fourth Circuit.

➽ It purposefully discriminates against and disproportionately impacts African-American and American-Indian qualified voters, in violation of the Equal Protection Clause in Article 1, § 19;

➽ It unduly burdens the fundamental right to vote, in violation of the Equal Protection Clause in Article 1, § 19;

➽ It creates separate classes of voters, treated differently with respect to their access to the fundamental right to vote, in violation of the Equal Protection Clause in Article 1, § 19;

➽ It imposes a cost on voting, in violation of the Free Elections Clause in Article I, § 10;

➽ It imposes a property requirement for voting, in violation of the Property Qualifications Clause in Article I, § 10; and,

➽ It impedes voters’ ability to engage in political expression and speech by casting a ballot, in violation of their Right of Assembly and Petition and Freedom of Speech as afforded by Article I, §§ 12 and 14. 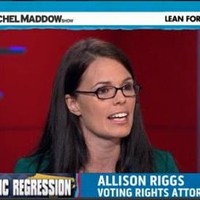 In a statement, Allison Riggs, senior voting rights attorney for the SCSJ, said, “The North Carolina Constitution provides numerous and inviolable protections for the fundamental right to vote of all its citizens. Just because the North Carolina Constitution now authorizes, with exceptions, the presentation of a picture ID when voting does not mean those other longstanding protections can be ignored or violated. It is the legislature’s duty to balance competing demands in the State Constitution. It has failed miserably in its exercise of balancing the new ID constitutional amendment, which explicitly allows for exceptions, with the numerous other state constitutional demands that have been interpreted to aggressively protect the right to vote. Any legislative scheme that requires voters to present ID when voting must have fail-safe measures to ensure that not one single eligible voter is disenfranchised. Our State Constitution demands it. This legislation does not do that. It simply replicates a scheme that we know disenfranchised approximately 1,400 voters in the March 2016 primaries.”

The complaint will be known to history as Holmes v. Moore, though there are several plaintiffs and several defendants besides NC House Speaker Tim Moore. Here's the actual complaint. The details about the various plaintiffs reveals one of the worst flaws about the new law -- how it will impact college students at private schools:

Plaintiff Shakoya Carrie Brown is a registered voter residing in Mecklenburg County, North Carolina. Ms. Brown is a 20-year-old African-American woman attending college at Johnson C. Smith University, a Historically Black College or University (HBCU) in Charlotte. She has been registered and voting in North Carolina since she arrived at college in 2016. She is originally from Florida, and in terms of photo ID, has only a Florida driver’s license and her student ID from Johnson C. Smith University. She does not own a car in the State of North Carolina.

The entire complaint is packed with detail and makes for riveting reading.

Thank you for your blog. I get so much great information that doesn't get the coverage it should get. This is a prime example. The GOP has done everything it can to con citizens about this issue. They think they've won, but it great that we are not going down without a fight. But, I guess if the only way they can win is by deception and cheating, that's what the GOP will do.
Thanks for speaking the truth and keeping us informed on issues that are important to NC.