Republicans Back Up To Hit That Iceberg Again 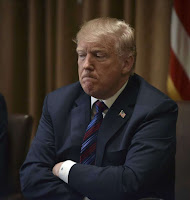 There's additional hopeful news for Democrats on top of that election: Congressional Republicans are noticeably uninterested in examining why they lost so decisively. “There has been close to no introspection in the G.O.P. conference and really no coming to grips with the shifting demographics that get to why we lost those seats,” said Representative Elise Stefanik, a losing upstate New York Republican. “I’m very frustrated and I know other members are frustrated.”

The GOP leadership is afraid to be introspective because eventually one name and one reason is going to float to the top of their consideration -- DJT and "Mr. Trump’s deep toxicity among moderate voters, especially women."

Rep. Ryan Costello of Pennsylvania, who retired rather than run again (and whose seat flipped to the Dems), spoke some truth: “It’s clear to me why we lost 40 seats; it was a referendum on the president, but that’s an extremely difficult proclamation for people to make because if they were to say that, they’d get the wrath of the president.”

There you have it. There won't be any out-loud soul-searching because these guys are afraid of Twitterman. Better to eat a Danish and drink a cup of acid, because the next two years are going to be full of peptic upset anyway.

"What alarms Republicans even more is that the possibility that disgust with Mr. Trump will be uncurable in 2020, when he will most likely be on the ballot, no matter the party’s agenda .... This sort of cold-eyed assessment has Republicans already expressing concern that more of their colleagues may retire rather than run again in 2020 — and that recruiting top-flight candidates could prove even more challenging going into the next campaign."

So we're starting our short-timer's countdown calendar now: How many Republican members of Congress will choose to retire rather than run for reelection in 2020?