One Thing We Know for Sure 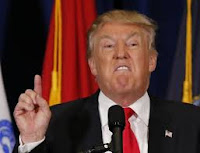 Gary Pearce, the sage of "Talking About Politics," has a straight-forward suggestion for Democratic congressional candidates running in 2018:

If I was running a Congressional race next year, I’d test this simple message in a poll:

“Trump is rash, reckless, irresponsible, unpredictable and dangerous. Somebody needs to keep an eye on him and keep him in check. My opponent won’t. I will.”

Keep it simple. Focus on the one fact people know for certain. They don’t know whether the tax bill is good or bad; taxes are confusing. They do know that Trump is rash, reckless, irresponsible, unpredictable and dangerous.

Posted by J.W. Williamson at 12/22/2017 10:02:00 AM
Email ThisBlogThis!Share to TwitterShare to FacebookShare to Pinterest
Labels: Donald Trump, Gary Pearce