Senators Burr and Tillis: We Won't Forget What You Voted For 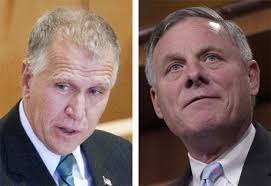 The redistribution of American wealth to the already wealthy is now almost complete. It's what we've all been asking, begging for, right? We need more space -- infinite levels of space -- between the mega-rich and the working poor, not to mention the getting-poorer-under-Trump middle class.

Just one hurdle left to jump: the conference between US House and US Senate. Their two different tax bills have a lot in common — dramatic cuts in corporate taxes, elimination of several key personal tax deductions, and a big change to the estate tax. But these two bills also have a number of crucial differences to be arm-wrestled before the final version reaches Trump.

Prediction: the bill that Trump signs will be more like the Senate bill than the House bill. The Senate is delicately balanced, like popovers: any shift in the crust could crash it. So the House will be more flexible. (Paul Ryan has already signaled that he's willing to accept the Senate repeal of the individual mandate under Obamacare, and ain't that a huge surprise!)

Corporate taxes will be cut forever in both House or Senate bills, but the Senate sun-sets the measly individual tax cut for the middle class, which will vanish -- poof! -- in 2025.

Both House and Senate would increase the child tax credit -- the House less so -- but both bills would also punish millions of families that don't make enough to pay income taxes but still pay payroll taxes, cutting them off from the expanded benefits. Senators Marco Rubio and Mike Lee (really!) tried last night on the Senate floor to insert a provision that would have expanded this tax credit to millions of low-income families. Rubio and Lee proposed to pay for it with a small bump in corporate taxes. Their proposal failed.

The Senate repeal of the individual health insurance mandate will cause a likely 13 million Americans to drop insurance coverage in the next decade, which will necessitate a spike in health insurance premiums for all the rest of us.

Since the Senate bill was being written, essentially, while it was being debated -- literally handwritten emendations in the margins of the earlier printed version -- there's still a lot of special-interest candy yet to be discovered among dozens of marginal provisions tucked in there at the last minute. Who had time to read those almost 500 pages of law? Any written text was not available to Democrats until the last minute, and it was unread by many Republicans senators who weren't about to buck the leadership no matter what might be hidden in that language.

One mysteriously added provision did get exposed on the Senate floor last night, exposed and ditched. Pennsylvania Sen. Pat Toomey had included a specific carve-out exemption to help the conservative Hillsdale College in Michigan, which is intimately connected to Sec. of Ed. Betsy DeVos.

I'm not even going to talk about the deficit-busting in both bills. I don't care. Republicans have always been total hypocrites, and they don't particularly care who knows it [cough] Virginia Foxx. That's the only take-away.

No surprises here. Nor will it be a surprise when Foxx votes on tax cuts for herself and her millions friends. Any proof that we needed that all of those who are supposed to represent us, don't represent 'us' at all is evident by this bill. Oh, who am I kidding. They have proven their real motives ever since they've been in office. They are there for their donors and themselves. And Foxx has a cushy job for life if she wants it. Hypocrisy doesn't even begin to cover their actions.