Evangelical Christianity in Crisis Over Its Political Choices 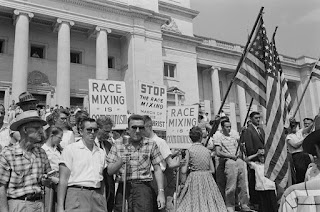 Wow. Even before the first vote was cast in the Alabama Senate race on Tuesday, Mark Galli, the editor of Christianity Today, had written an editorial that evangelical support for Roy Moore (and Donald Trump too) had tarnished "Christianity's integrity" for at least a generation.

Galli is critical of liberal evangelicals too. (Yes, Dorothy! There are liberal evangelicals in this world, though they are infrequently featured on Fox and Friends.) Galli says that liberal Christians have been too quick to condemn all conservative Christians for the "conservative idolators of political power," that handful of media whores like Franklin Graham who get all the attention:


The problem with many Christian conservatives is this: They believe they can help the country become godly again by electing people whose godliness is seriously questioned by the very people they want to influence.

According to Laura Goodstein,


The bloc [of Christianity] that has marched under the banner of the “Moral Majority” and “values voters” has now been tagged as the most reliable base of support for both Mr. Moore and President Trump, two politicians who are known for fanning racial and religious prejudices and who stand accused of sexual harassment by numerous women .... White evangelicals across the country delivered 81 percent of their votes to Mr. Trump last year, according to exit poll data, and backed Mr. Moore in Alabama by the same proportion on Tuesday.

Evangelical slavishness for the likes of Donald Trump appears to be cracking a little. According to Goodstein, "There are young evangelicals who are disavowing their elders. There are Latino, Asian, black and Native American evangelicals who are outraged at white believers for allying with a president they regard as racist and hostile to immigrants."

A poll conducted from Nov. 29 to Dec. 4 by the Pew Research Center found that the president’s job approval among white evangelical Protestants had fallen to 61 percent, from 78 percent in February.

Are some evangelicals having their moment of light like Saul of Tarsus on the road to Damascus?