More on the "Blueing" of Republican Suburbs

The NYTimes has a big article out this morning highlighting what we've been talking about since November 8, when the suburbs of Virginia and New Jersey turned out many veteran Republican lawmakers, and voters in special and in municipal elections across the nation also showed clear signs of rejection of Trump's MAGA.

Here are some of the Democratic candidates arising to challenge once safe Republican incumbents:

Texas-7 was carefully gerrymandered out of the suburbs of Houston to be Republican-friendly. Culberson won reelection there in 2016 with 56% of the vote. Fletcher is a lawyer who out-raised the incumbent during the last fundraising period, but she's also one of at least seven Democrats who'll be competing in the Democratic primary to challenge Culberson.


Utah-4 takes in part of Salt Lake City (SLC) and south through the affluent suburbs of Sandy and Provo. McAdams is mayor of SLC, a liberal oasis in a sea of red, but Trump is noticeably unpopular among Mormons, especially well-educated Mormons. Love is the first black female Republican elected to Congress and the first black American elected to Congress from Utah, first elected by the thinnest of margins in 2014 and reelected in 2016 with 53% of the vote. McAdams will have a Democratic primary with at least three others.

Kentucky-6 takes in all of Lexington (including its suburbs, not to mention the University of Kentucky) and the state capitol of Frankfort. Jim Gray is the popular mayor of Lexington, but he got into the Democratic primary after Amy McGrath, a former Marine pilot who reportedly has raised more than $1 million. The incumbent Republican Barr has won both his elections to Congress with at least 60% of the vote.

Pennsylvania-8 is as white-collar Republican as you can get, taking in all of Bucks County. Democrat Wallace, a lawyer and philanthropist whose grandfather was one of Franklin D. Roosevelt’s vice presidents, is as yet unannounced, but he's known to be considering the race. There's already an announced Democrat, Rachel Riddick, so there'll likely be a primary. Incumbent Republican Fitzpatrick, who was first elected in the Tea Party wave of 2010, will also have a primary.

The Ohio-1 was gerrymandered to take in Warren County and the suburbs north of Cincinnati. It's been considered a safe Republican seat. Sittenfeld is a Cincinnati city councilman and is being heavily recruited by the US House Democratic recruitment machine. Two other Democrats are already in the race. Republican Chabot was first 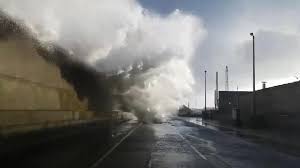 
The Washington-5 is in far eastern Washington state and takes in all of Spokane, the state's 2nd largest city. McMorris Rodgers is part of the Republican House leadership and is considered unassailable, but Democrat Brown is a former Washington state senate leader and more recently the chancellor of Washington State University's Spokane campus.


The NC-9 is Charlotte-centric and Surburbia Prime. Pittenger looks weak and may lose his primary to pulpit-pounder Mark Harris, who will then face Democrat and ex-Marine McCready in the general election. In North Carolina, this will be ground zero for any Democratic wave.

The Illinois-6 has been considered safely Republican, as it wraps around the western suburbs of Chicago, but it rejected Trump for Clinton by 7 points in 2016. Mazeski is one of at least seven Democrats who'll go head-to-head in a Democratic primary for the privilege of taking on Roskam, who took over the 6th District from Henry Hyde in 2006.

Posted by J.W. Williamson at 12/19/2017 11:18:00 AM
Email ThisBlogThis!Share to TwitterShare to FacebookShare to Pinterest
Labels: 2018 Midterm elections, Donald Trump

The Idiot-in-Chief in the White House is still claiming that 2018 is going to be a wonderful year for Republicans because of HIM! And he says he's ready to go campaign for Republicans in every district in the nation. Can't wait to see those invitations from Republican incumbents come rolling in. Lol