Get Ready for the Bragging, But Trump Ain't Standing Up for the Forgotten Man 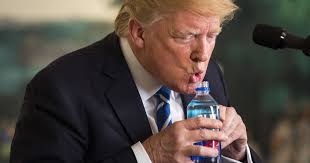 1. He's going to sign that tax bill like it's the greatest achievement for "common people" since chickens agreed to die for Col. Sanders. Well, it's great for Trump and other billionaires, fer sure. It will deliver its largest benefits, "not only in dollar terms but also as a percentage increase in income," to corporations and the wealthiest Americans. Trump's own family stands to gain from tax breaks maintained or extended for corporate real estate ventures, and his heirs have reason to celebrate the doubling of the exemption from estate taxes.

2. With Rep. Virginia Foxx doing the leg-work, Trump's Education Department plans to roll back protections for college graduates saddled with student debt from sham for-profit universities. That's working-class kids who thought they'd get a leg up in this labor market by giving all their money to fake institutions of higher training, who are, in turn, giving big gobs of cash to Virginia Foxx.

3. Last week, the Federal Communications Commission, led by Trump’s new chairman, reversed the Obama-era policy known as net neutrality, over the objections of consumer groups and owners of small internet businesses, who fear that without the protection, giant internet service providers like Comcast and Verizon will charge internet companies for offering “fast-lane” speeds, slow down the content of companies that do not pay or even block them. Consumers could be charged variable rates for internet access, depending on which websites they visit. Does that look like "standing up for the forgotten man" to you?

4. Who knows if Trump even knew all the Federal regs that he rolled back, or was just signing whatever anybody put in front of him because he thinks signing his name is akin to making royal decrees. But one rule he eliminated -- out of dozens -- required retirement planners to agree that financial advice had the client’s best interest at heart, not the investment company’s. That ain't a rule any more.


His rhetoric is always about the "forgotten" Americans he's going to help. "You will never be ignored again," he told the screaming crowd in Pensacola just days before his Senate candidate in Alabama lost the race. It's all just show biz, the strutting of a reality show huckster whose act has worn thin. May the New Year kink his gut.