See Ya Wouldn't Want To Be Ya 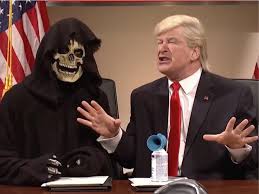 The best thing that could happen to the National Republican Party in the short term -- Roy Moore loses in Alabama. Otherwise, he's the aloha lei that every Republican at every level will be wearing in 2018, and it's not going to smell garden fresh.

Meanwhile, Trump is the nominal leader of the Republican Party but displays little actual leadership. Oh, he'll stomp on someone he thinks dissed him, like Jeff Flake of Arizona and Bob Corker of Tennessee, but as far as providing the political machinery by which Republican candidates can run next year, that ain't exactly happening. Trump's poll numbers are stuck at a low register, and Republican office-holders who have to run again in 2018 are trying to figure out how to run without inviting Trump into their states or districts.

Then there's the Trump whisperer, Steve Bannon, who's said he'll primary every Republican incumbent senator except Ted Cruz next year. What does Trump do? Does he dive in to help the incumbents against insurgents, like he tried to help Luther Strange in the Alabama primary? He's still miffed about that, that Strange lost by 9 points. He's complained that he should never have listened to Republican Party operatives who told him he had to campaign for Strange to protect the party. That's why calling Trump the "head of the GOP" seems like a suicide pact.

More like he's the demise of the GOP, the virus that wipes out the host. So we get the spectacle of the RNC withdrawing financial support from Roy Moore weeks ago and then hurriedly reinstating it yesterday after Trump tweeted on Monday his full endorsement of the child molester. Trump didn't tell anyone in advance he was going to endorse Moore, so the RNC is left looking like what it is -- rudderless and without any moral foundation.