Senator John Kennedy and Trump's Subversion of the Judiciary

Senator John Kennedy of Louisiana became my favorite Republican office-holder when I witnessed him take down one of Trump's yoogely unqualified Federal judge candidates:

That candidate, Matthew Spencer Petersen, is history. He withdrew himself from consideration yesterday. Score one for the judiciary! Score two and three too! Senator Kennedy has been single-handedly responsible for two other scalps, both glaringly unworthy for the Federal bench but both confidently nominated by the glaringly unworthy wrecking ball in the White House -- Brett Talley, who writes horror fiction and once posted a message board comment defending the Ku Klux Klan, and Jeff Mateer, who gave public speeches advocating discrimination against the LGBT community and called transgender children proof that “Satan’s plan is working.”

Earlier in 2017, Kennedy became the first Republican senator to vote against one of Trump’s judicial nominees when he opposed Gregory Katsas for a spot on the D.C. Circuit. Katsas was confirmed 48-50, without Kennedy's vote. (Kennedy said Katsas' work in the White House created conflicts of interest that “a first-year law student could see.”)

Speaking of Trump judges, did you hear what just came out about Trump and Neil Gorsuch? Trump told close associates back in February, soon after he'd announced the appointment to the Supreme Court, that he wanted to "rescind" Gorsuch's nomination because he had heard what Gorsuch admitted to Sen. Richard Blumenthal (D-Conn.) before his confirmation vote that Trump’s repeated attacks on the federal judiciary were “disheartening” and “demoralizing.”

Based on that comment and according to Ashley Parker et al., "The president worried that Gorsuch would not be loyal."

There you have the attitude that will be the death of an independent judiciary. Do you need a roadmap for where this man intends to ditch the body?  --the mangled body of the Law, the administration itself of justice, the independence of a judiciary that is by its own ethical rules non-partisan.

Does Trump's plain disrespect for judges not remind you of what Phil Berger wants to ram through the General Assembly -- the complete subjugation of judges and the imposition of an authoritarianism that equals nothing on this side of the Atlantic in blessed memory.

The Singular Senator John Kennedy and the Fruits of Revenge
You have to admit: That name is kind of eerie

I'm indebted to James Hohmann for these details about Kennedy: 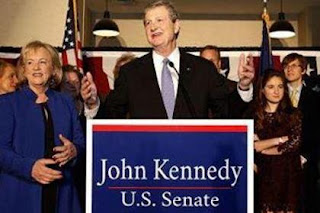 served as legal counsel in the 1980s to then-Democratic Gov. Buddy Roemer

ran for attorney general of La. in 1991 as a Democrat, but lost

was appointed state treasurer of Louisiana in 1996 and served continuously via reelection until recently, first as a Democrat and then as a Republican

in 2004, ran as a "pro-John Kerry Democrat" against Republican David Vitter for the Senate, but lost

in 2007, after a heavy courtship by the Republican National Committee, converted to Republican, and with help from Washington, ran against Democratic Senator Mary Landrieu in 2008, but lost

in 2016, ran for the seat David Vitter was retiring from, and won. So he's brand new in the Senate

In Washington, Senator Kennedy has become a favorite with reporters. He likes to talk, and he's not shy with the opinions. He complained three weeks ago to reporters that the White House was ignoring his concerns about the subpar quality of President Trump’s judicial nominees. “It’s like talking to the wind,” Kennedy said.

About nominee Petersen, Kennedy told the New Orleans TV station WWL: “Just because you’ve seen ‘My Cousin Vinny’ doesn’t qualify you to be a federal judge. And my job on the Judiciary Committee is to catch him. I would strongly suggest he not give up his day job.”

According to sources harvested by James Hohmann, Kennedy may be taking some revenge on White House Counsel Don McGahn, who early in Trump's term ignored Kennedy's wishes in picking a Trump nominee for US attorney in New Orleans. Hmmm. Diss the newly elected Republican senator from Lousy-anna, will you? Well, we'll see about that!

Both dearly departed judgeship nominees Michael Petersen and Brett Talley -- and Gregory Katsas too, who barely made it to the bench, with Kennedy voting no -- all three were closely connected to and mentored by Don McGahn. Katsas was his deputy White House counsel. Talley is married to McGahn's chief of staff.  Their sudden fall at the hands of Senator Kennedy might be a stitch too coincidental.