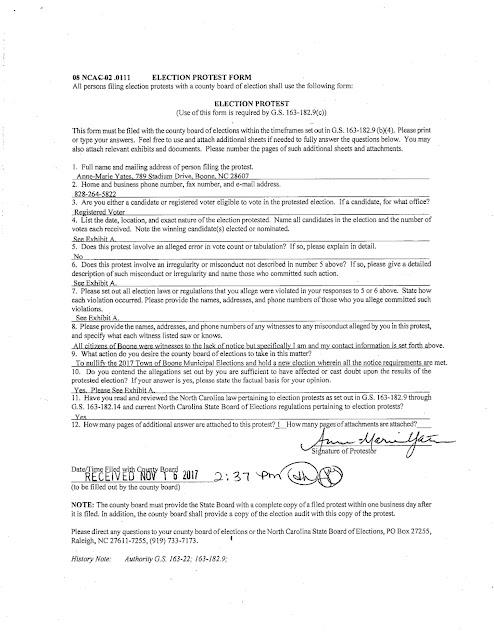 Miller is vice chair of the Watauga Republican Party. Yates has been nominated to take a Republican seat on the Watauga BOE. They're leading the Watauga GOP in this action (and have a track record of harassment behind them: this and this).

My Own Findings of Fact

2. It was the other Republican team of Nathan Miller-Bill Aceto that delayed announcement. Because Bill Aceto refused to approve the inevitable polling place inside the ASU Student Union -- the BOE vote was 2-1, with Aceto in the minority -- he then took his objection in a lawsuit to Wake Superior Court, and when that court thrashed Miller for the effort -- waving the Judge Donald Stephens order from 2014 in his face -- Miller-Aceto stomped off to the NC Court of Appeals and talked them into a temporary stay, which is not all that difficult and which was not lifted (inevitably) until the eve of Early Voting. 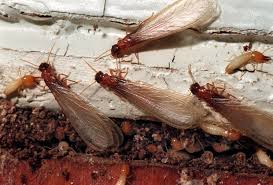 3. So do I have this right? Watauga Republicans block and delay the setting of Early Vote polling places until the courts order them at the last minute and then file to nullify the election because polling places weren't set early enough. Cool!

4. The Republican Party fielded no candidates in Boone in either 2015 or this year. Do they suddenly have some hot candidates they want to run in a re-do?

5. Or are they the termites eating the shelter?

6. Any action by the Watauga BOE tomorrow -- either finding just cause to nullify the election and call a new one or finding no just cause -- either one will take a unanimous vote. Aceto's with Miller, so you do the math.

7. What happens if there is no unanimous vote? Miller-Aceto can appeal to the State Board of Elections (SBOE), but the SBOE doesn't currently exist (thanks to monkeying with the law by Republicans in the General Assembly and the subsequent blocking court order), and the SBOE staff has limited power.

8. If also stymied at the SBOE, Miller-Aceto can always appeal to Wake County Superior Court. We'd almost pay money to attend that hearing.