Gorka Sees the Future, and You're Not in It 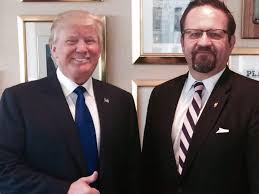 Sebastian Gorka, Trump's former White House Lucifer-lookalike, told an auditorium full of College Republicans last night in Chapel Hill that he predicted and firmly believed that Trump will complete eight years in the presidency and will be followed by eight years of Mike Pence. The students cheered. According to the News and Observer, there were about 200 in the room.

I love political prognosticators. They make my corpuscles bunch and run. I listen to them avidly and read their opinions wherever I can find them, and then if they're writers, I want to see what they look like and whether I can take what they predict as possible. Or anyways likely. Or merely self-congratulatory fantasy based on living in a box.

Gorka is not clothed in credibility. He's all about macho dominance of perceived enemies. He famously bragged about Trump, “the alpha males are back,” and he itched to give Islam -- the whole religion apparently -- some alpha male comeuppance. He was in on drafting the first Muslim ban. He was and still is a satellite of Steve Bannon and a regular contributor to Breitbart News. He had an ill-defined job in the White House -- like Omarosa -- and new Chief of Staff John Kelly got rid of him on August 25, 2017.

Gorka wrote a "resignation letter" that was excerpted in The Federalist. It's a "kiss my white ass!" directed at John Kelly:


“given recent events, it is clear to me that forces that do not support the MAGA promise are – for now – ascendant within the White House. As a result, the best and most effective way I can support you, Mr. President, is from outside the People’s House.”

So Gorka tells the students in Chapel Hill last night that he wasn't fired. He resigned. And then predicted an Era of Trump/Pence. He described Trump as “Kryptonite to political correctness” and an “unstoppable steam locomotive.” Macho authoritarianism? Yes indeedy, there's authoritarianism, but it's all coming from the Middle East, or from anyplace Muslims are in the majority. Trump is, in essence, an alpha male saving the race.

What a time we live in! Members of churches all over Alabama have become winkers at child molestation, perhaps in concert with also thinking Trump was divinely appointed to the job. Trump has finally bullied Sessions into pursuing Hillary Clinton with a Special Prosecutor, and the president just appointed his lawyer's husband to a federal judgeship (in Alabama, no less), a man who only became a lawyer three years ago and has never tried a case and has a social media history that strongly suggests he lacks a judicial temperament, and oops! he failed to tell Congress he has a conflict of interest with the Trump White House.

So in such a whirling world, Gorka predicts 16 years of Trump/Pence. I ask you, in a world so warped, who can confidently prognosticate otherwise? (Though my corpuscles are telling me another story altogether.)