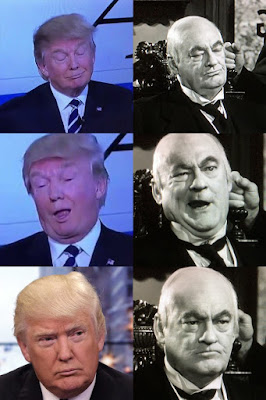 Above, what Trump said in Missouri yesterday, touting the wonderfulness of the Republican tax plan, which he's obviously neither read nor understands. He kept claiming among other things that he personally will not benefit from the tax bill, which it not at all true. Trump will benefit personally, exactly how much depends on what his tax returns show, and you know about those missing documents.

"I don't care anymore." Translation: I don't give a flying fuck what anybody thinks about anything, because that don't-give-a-shit attitude is what my followers love the most, and it's my impression that so long as I'm a complete and total jerk, an unleashed racist, a bullying braggart, I'll be swathed in gold and sit in power forever.

Did I say he doesn't know what's in the tax bill, or else -- another likelihood -- he just likes lying to puff himself up -- but he's continuing to peddle such complete horseshit about how wonderful his tax "reform" is going to be for the little people, when it's not going to be wonderful at all, and the pittance the Republican "reformers" in Congress are willing to front-load for some of the poor and the middle class in lower taxes will all be taken away in a few years while tax cuts for the rich are made permanent.

It's Trump Trickle-Down. Corporate taxes and taxes on the already filthy rich -- slashed, on the presumption that when people in penthouses get relief, the benefits flow down to basement tenements. Are you going to buy that thoroughly disproved theory once again?

Posted by J.W. Williamson at 11/30/2017 11:28:00 AM
Email ThisBlogThis!Share to TwitterShare to FacebookShare to Pinterest
Labels: Donald Trump, federal taxes