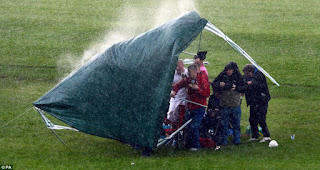 Yesterday Kim Strach, Executive Director of the NC State Board of Elections, overruled Watauga County Board of Elections Chair Bill Aceto, deciding that the election day polling place next Tuesday for the Boone 2 precinct would be in the Appalachian State Student Union, the most logical place for it.

The Legends nightclub in the old (very old) A&P building flooded badly a week ago Sunday and cannot be used any longer as a polling site. Bill Aceto refused to move Boone 2 precinct into the Student Union and into the same room where Early Voting has been going on for several days.

Bill Aceto suffers from the ASU Student Voting Derangement Syndrome. Aceto even proposed erecting a tent on the Legends parking lot for voting next Tuesday. Anything to keep from going to the Student Union.

But Kim Strach wasn't having it. She exercised her emergency powers and ordered that the Student Union be used instead of a tent in a parking lot.

Jerry--a typo calls "Legends" "Legion"--voice recognition error? Anyway, sooner or later, probably sooner, this building is going to be torn down (and its parking lot no doubt lost) for some high-rise purpose--property is too valuable to keep using it as a student nightclub. I know Dave Robertson and many alumni wish it could survive, but it is unlikely. We hear each election cycle how unsuitable it is for voting and how much better is the Union. Now after this last flooding it's not just unsuitable for voting but also downright unhealthy for college kids, bands, etc. The university has lavished million$ on that Student Union over the past couple of decades. Why can't students party/dance/drink/listen to bands there? If some areas need modifying to serve that purpose, well I am sure student fees can be increased to pay for them.

Good for Watauga! Let's face it, it would have looked mighty bad had Kim Strach not exercised her power to make the common sense change from Legends to ASU Student Union, and hopefully from now on, the use of Legends will be ditched ~ or trashed! Realistically, it's an unfit voting site.

When is it gonna be time for Bill Aceto to sit down and shut the hell up? I know it's news, but these 'we all play by the same rules' republicans LOST the Governor's race. Mr. Aceto should have ONE MINORITY vote on issues under the purview of the BOE, and it should end there.

Oh wait. I forgot. We don't play by the same rules. We're supposed to play by THEIR rules now, at least while we slog through the courts to overturn the GA tripe passed after the last election.