Have a Hearty Thanksgiving, Texas! Here's Your Turkey

Give a man vast political power and a computer, he'll get himself into trouble every time: 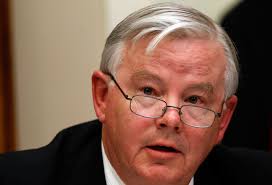 "The woman described encounters and contact spanning a five-year period that began online after she posted a message on [Texas Representative Joe] Barton’s Facebook page in 2011, leading to the sexually explicit exchanges and ultimately a pair of physical sexual encounters in Washington and Texas. Over time, she said, she became aware of and corresponded with multiple other women who engaged in relationships with Barton, who represents a suburban Dallas district and is one of the most senior Republicans in the House....

"In the 2015 phone call, Barton confronted the woman over her communications with the other women, including her decision to share explicit materials he had sent. In that context, he mentioned the Capitol Police, a comment the woman interpreted as an attempt to intimidate her.

“ 'I want your word that this ends,' he said, according to the recording, adding: 'I will be completely straight with you. I am ready if I have to, I don’t want to, but I should take all this crap to the Capitol Hill Police and have them launch an investigation. And if I do that, that hurts me potentially big time.'

“ 'Why would you even say that to me?' the woman responded. 'The Capitol Hill police? And what would you tell them, sir?'

"Said Barton: 'I would tell them that I had a three-year undercover relationship with you over the Internet that was heavily sexual and that I had met you twice while married and had sex with you on two different occasions and that I exchanged inappropriate photographs and videos with you that I wouldn’t like to be seen made public, that you still apparently had all of those and were in position to use them in a way that would negatively affect my career. That’s the truth.' ”

Mike DeBonis and Elise Viebeck, "Congressman on tape tells woman he would report her to Capitol Police because she could expose his secret sex life"

Posted by J.W. Williamson at 11/23/2017 09:37:00 AM
Email ThisBlogThis!Share to TwitterShare to FacebookShare to Pinterest
Labels: Joe Barton, Texas

Conyers must be advising him.

How dumb do you have to be to get elected to Congress from TX?

Anonymous wrote: "Conyers must be advising him."

Actually, it was Dennis Hastert.