One Republican who has come out as planning to run against Congresswoman Virginia Foxx in the 2018 Republican primary is Matthew Vera. I wrote about him before. Now I discover a second Republican looking to unseat Foxx, one Courtland J. Meader (some impressive name, that). 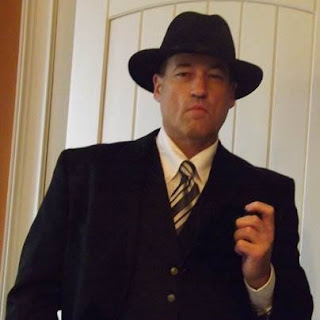 He actually declared his candidacy on August 11 on his Facebook page, describing himself as "a rock and roll loud mouth bad ass Republican that's going to shift shape in Washington." Okay, I get the loud mouth and bad ass parts, but a shape-shifter? That kind of means we can't trust where he stands right now and that once he gets to Washington, he'll be changing shapes. Or else I don't know how to read English.

His Facebook page, like his photograph, suggests a braggart who might be more hat than cattle. Apparently, he has THE solution to Obamacare which will change the world and wow the millennials and save money and redeem the irredeemably poor and cure the heartbreak of psoriasis. He's big on bragging and thin on detail. It's just gonna be a miracle, and you'll have take his word for it.

He's going to beat Virginia, evidently, by essentially melding into her, but to be honest I'm not sure he's actually ever met the Madam:


Virginia is a sweet, endearing woman, but she has also become a career politician with little interest in making big changes and battling the very well organized loud mouth liberal Democrats in this nation. Respectfully, at her age she just doesn't even have the moxy for it. We are on the same side technically, and I wish to stay as far away from denigrating Rep. Foxx as I can, because she is a decent person - but I also know it's time to hand over the baton. Her time has been, my time has come. [italics added only where amazement broke out]

I'm on my way to cheering him for that, but then he defines his Republicanism in a very curious way:


I'm a member of the Republican party for my own reasons, but they do not rule over or create my political or social views. My policies are problem solving and absolutely non-partisan, as they address and solve problems - not worry about which side believes what or desires whatever. My policies are for the people.

"For my own reasons"? What does that mean? Republicans "do not rule over my social views." Great! if I understand what you mean. But how does that square with "bad ass Republican"? I'm confused.

Getting a clear policy position out of Courtland J. Meader is going to take a bit more research.

Googling on Meader turned up a couple of curious links.

He may have been an exec with a bank in Ohio in the 1990s. His name turned up in a local news article there.

Neighbors are complaining about a property he owns for gang related issues, no maintenance, overcrowding, and graffiti. Perhaps he's an absentee landlord?

And was he involved in a case of assault with a deadly weapon in the 1980s?

Love these opportunist shape-shifters who now have license (since Steve Bannon crawled out from under his peculiar rock) to stroke their egos with incoherent public declarations. Can you think of anyone else who has emerged in GOPer ranks "big on bragging but thin on detail?"