Our Idiot Will Make the U.S. a Rogue Nation 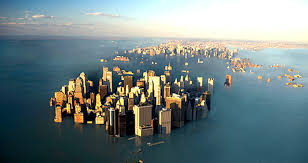 Exxon Mobil’s chief executive, Darren W. Woods, is strong in his defense of this nation's remaining a part of the Paris climate agreement. Woods is part of a "nearly united corporate front" that's been urging Trump not to withdraw from the agreement. “By expanding markets for innovative clean technologies, the agreement generates jobs and economic growth. U.S. companies are well positioned to lead in these markets,” a host of corporate giants, including Woods, wrote in full-page advertisements that ran recently in The New York Times, The New York Post, and The Wall Street Journal.

But Steve Bannon is evidently back in the driver's seat in the Oval Office, and CBS News is reporting just now -- or confirming -- that Trump will indeed announce that he is withdrawing us from the Paris agreement.

According to Michael Shear and Diane Cardwell,

Environmentally oriented groups like Ceres, the Business Council for Sustainable Energy and the Center for Climate and Energy Solutions have brought together big companies like Apple, Ingersoll Rand, Mars, National Grid and Schneider Electric to appeal to the president to stay in. Many of them operate globally and worry that if the United States abandons the deal, it would be harder to operate in existing markets and break into new ones.

But, never mind. Trump means to pander to the ignorance of his greedy, short-distance sprinters (Donald much prefers a golf cart to walking anyway), and he will make the United States the newest pariah on the planet.

How far above sea level is Mar-a-Lago? 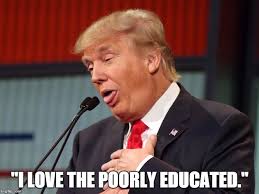 Yep, Big Oil and democrats working together to save the environment.

Big Oil wants the Paris accord so they can control or eliminate competition and democrats want it to kill small business and enact more fascist controls.

Anonymous wrote: "Big Oil wants the Paris accord so they can control or eliminate competition and democrats want it to kill small business and enact more fascist controls."

I believe there is some truth to the first part of the statement, but the 2nd half is just ludicrous.

The oceans are rising not from global warming, but from all the hippie tears that have been shed since Trump was elected.

No more Paris Accord! YEAH!

Are we hippies or fascists? I'm confused.

You are the type of uniformed and belligerent intellect that was audience to the rise of the Nazi party.
You need to crawl back under the rock you came from. You are truly an ugly American who feels emboldened by our dip-shit, wanna-be dictator, president.

I only want the maximum amount of freedom and prosperity for all Americans.

Government is an impediment to personal freedom.

So supporting personal freedom makes me a Nazi?

You need to do some research.

Mazi is a nickname for National Socialist German Workers Party.

Socialism is not about freedom or prosperity. As with other forms of government it is about empowering a few at the expense of the many.

Wolf's comments fascinate me. Wolf, even you have your threshold, I'm sure. You're not saying that all government is always bad, are you? Do you really think that this country could function with no government at all?

All government is inherently bad because it must infringe on the rights and liberty of the individual in order to do anything.

We are supposed to voluntarily grant government this infringement on our freedoms in order to act as our proxy for handling problems the individual can't.

Fraud for instance, real crime, such as murder, rape, assault robbery, or protection from enemies outside our country.

Our government is not designed nor founded to empower moralizing busy bodies to control every fu**ing facet of other peoples lives.

That is what our government has become.

Absence of government is anarchy, but societies can function without government if they have a common belief and moral system. We no longer do.

Absence of order is chaos, which is not the same thing as anarchy.

From what I read here it seems I am a pariah because I believe in individual liberty and rights, such as they right to keep what you morally earn.

The problem with the American Revolution is they threw out one government, but then put in place another. It now oppressive far beyond anything the Founders experienced.

Fascinating. Can you give us an example of a modern country that functions "without government "? Also, how does one "morally" earn anything? If I'm flipping burgers at McDonalds, what's moral about that? Do you really think that conservatives believe in less government? I've yet to see evidence of that.

Sorry for the poor grammar in the last posting, public school education and all that.

I think your grammar is fine. You just HAD to throw in a little dig at the public schools, didn't you? How wold you have been educated if not for them?

Never said there was a modern country without government.

Never said I believe in NO government.

Reading comprehension is a real problem with the left.

Flipping burgers is moral if you are paid for it and are doing voluntarily. If you don't like it, quit, there ain't no chains holding you there.

Of course conservatives believe in more government, that's why they are part of the problem.

Wow. I didn't insult you, Wolf. Is that all you've got? So suddenly I represent "the left" after one comment? I merely asked for an example of a country with no government- I didn't say that you claimed there was one. You said that all government was inherently bad, so I asked the logical question of whether you believed this country could function with no government. I never said that I thought you believed in no government! Quid pro quo on the reading comprehension, I guess! So what do you consider yourself to be? You're obviously not a "leftie" or a conservative. What are you? An anarchist?

Wow anonagain, so argumentative, and wanting to lure me into useless arguments.

All government is inherently evil, but a necessary one. I want people to suffer the least amount of evil possible.

If you support more government, look around, it's not working very well for your left/right is it?

It's working even worse for ordinary folks.

Why don't you tell me how more government is going to make our lives better?

Just as I thought.

As shown by the recent testimonies before Congress the left refuses to accept the given answers.

And just like little children they keep repeating the same question hoping for a different answer.

And, of course, there is the fact that there is no way that anonagain could possibly show how more government was better for the people or the country.

It only benefits the small minority that pulls Congress's strings.

Poor anonagain is merely one of their dupes who constantly votes for more government thinking it will somehow benefit the poor downtrodden underclass when he is just placing a heavier boot on their necks.

Wolfie has extreme views. In any universe, he's an extremist. But even worse, he's an arrogant prick who likes coming on here -- bored with the Watauga Conservative, apparently -- and insulting everybody. Insult, insult, insult. That's just plain arrogance. He's also an extremely (!) unpleasant human being, and I'd like to put in my vote right now that he be banned from Watauga Watch for the good of the community.

Wow. You don't know jack shit about me, Wolf. I didn't insult or demean you in my posts, and this is what I get in return. Somehow you've labeled me as "the left " after one comment. Forget it. I tried to have a civil discussion but it seems you're not interested in that. You probably only come on this blog to stir the pot and demean the poor liberals. Sorry, I'm not playing that game.

"and I'd like to put in my vote right now that he be banned from Watauga Watch for the good of the community." O Suzannah

I may be banned here, but you cannot ban me in the real world, anymore than I can ban liberals. In posting here I find that as divided as we are in cyberspace, we are even more divided in "meatspace".

I am enjoying Trump's dismantling of some establishment programs, such as sending corporate fines and penalties to their victims or the Treasury instead of leftist organizations, but in the end it will be futile. Not because in the end the left will win, or the right, but that in the end we will all lose.

We are only becoming more divided as a country, and while the politicians do their dance with different partners to make deals, here, in the citizenry, there can be no reconciliation. There is no way to bridge the divide.

The split is widening, I don't know how long it can last.

Anyway, it's all up to JW. He screens what gets put on here, not everything I post makes it.

It is his site, and he can do as he wishes.

If this is my last post, well, good luck.

Good job, Wolf. I couldn't have said it better myself.

Whew - what a cynical view of this country, Wolf. I think you're selling America short.