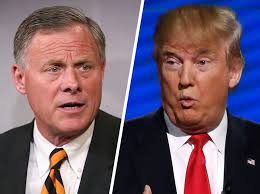 About the reported information that the Israelis shared some highly sensitive terrorist intel with Trump, and Trump promptly shared it with the Russians, the Trump White House has put out two different stories. First, it never happened. Second, it happened, but Trump had every right to declassify highly classified intel with any Tom, Dick, or Ivan he pleases.

Senator Dick Burr of North Carolina, chair of the Senate Intel Committee (which is currently rustling the covers of the Russia investigation), said almost immediately that he wanted a transcript of what was said in that Trump confab with the Russians. The American press had been barred, so Burr put in a call to the White House, which went unanswered. (According to reporting in the Boston Globe, the White House was not returning calls to "Republican allies," which is never a good sign.) When he hadn't heard a peep out of the White House for hours, Burr said, lamely, or maybe facetiously, "Maybe they're busy." (Not making this up.)

Burr continued, as quoted by Annie Linsky: ‘‘My major concern right now is that I don’t know what the president said. I’d like to think somebody from the White House who was in the room is going to get on the phone and tell me what they said.’’

Really, Dick? Hearing it from the White House is going to clear it all up?

Meanwhile, The Other NC Senator Thom Tillis, who seems to be experiencing serious stresses on the ole chassis right now, edged away ever so slightly from his president. Tillis said he wanted to know exactly what Trump handed the Russians: “If it’s information that was shared with the Russian ambassador, it seems to me it would be okay to be shared with US senators.”

That's pretty bold of you, Mr. Tillis, but the Getting Bolder By the Day Medal goes to Burr.