George Will: We Need to Quarantine Donald Trump 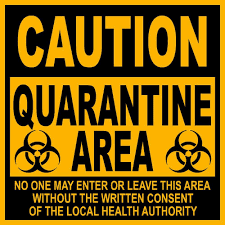 Year's ago I quoted, approvingly, George Will on a point of psychology that underlay the main argument in a book I was writing: "Something in us is drawn toward what we are ashamed of being drawn toward."

George Will was there for me 20 years ago, so I am here for him now.

His essay, "Trump Has a Dangerous Disability," posted yesterday evening, contains wisdom that I would quote approvingly if I were writing a book today:

It is urgent for Americans to think and speak clearly about President Trump’s inability to do either. This seems to be not a mere disinclination but a disability. It is not merely the result of intellectual sloth but of an untrained mind bereft of information and married to stratospheric self-confidence....

His fathomless lack of interest in America’s path to the present and his limitless gullibility leave him susceptible to being blown about by gusts of factoids that cling like lint to a disorderly mind.

Americans have placed vast military power at the discretion of this mind, a presidential discretion that is largely immune to restraint by the Madisonian system of institutional checks and balances. So, it is up to the public to quarantine this presidency by insistently communicating to its elected representatives a steady, rational fear of this man whose combination of impulsivity and credulity render him uniquely unfit to take the nation into a military conflict.

Posted by J.W. Williamson at 5/04/2017 04:52:00 PM
Email ThisBlogThis!Share to TwitterShare to FacebookShare to Pinterest
Labels: Donald Trump, George Will