Trump to America: "Turns Out, Swamp Creatures Have to Eat Too!"

Just out this morning -- news that Trump has issued ethics waivers to at least 16 employees who are also former lobbyists. They have been given permission to "work on policy matters they handled while employed as lobbyists or to interact with their former colleagues in private-sector jobs."

Who got the waivers and why? According to reporting in the NYTimes, here are some of them:


Michael Catanzaro, who until January was registered as a lobbyist for companies including Devon Energy, an oil and gas company, and Talen Energy, a coal-burning electric utility. "Catanzaro moved from lobbying against Obama-era environmental rules to overseeing the White House office in charge of rolling back the same rules, an activity permitted by his waiver."

Shahira Knight, who had been a lobbyist for Fidelity Investments and now serves as a special assistant to the president for tax and retirement policy — the same topic she had lobbied on while working for Fidelity, one of the largest retirement-investment companies in the United States.

Donald F. McGahn II, the White House counsel, along with four other former lawyers and another former employee from Jones Day — the law firm that handled compliance matters and other legal issues for the Trump campaign -- has a waiver to "communicate" with his old firm.

Stephen K. Bannon, the president’s chief strategist, who was an executive at Breitbart News, got a special waiver that was retroactive to January 20, which eliminated an apparent ethics problem for Bannon, who had continually advised Breitbart editors after the inauguration on what they should publish about Trump.

Trump promised repeatedly to "drain the swamp" and limit the influence of lobbyists in Washington. Instead, he's doing precisely the opposite. Robert Weissman, president of Public Citizen, said, “They [the Trump administration] are circumventing what they touted as their signature ethics achievement. It’s utterly at odds with candidate Trump’s ‘drain the swamp’ rhetoric and it suggests that the Trump executive order is not worth the paper it is written on.” 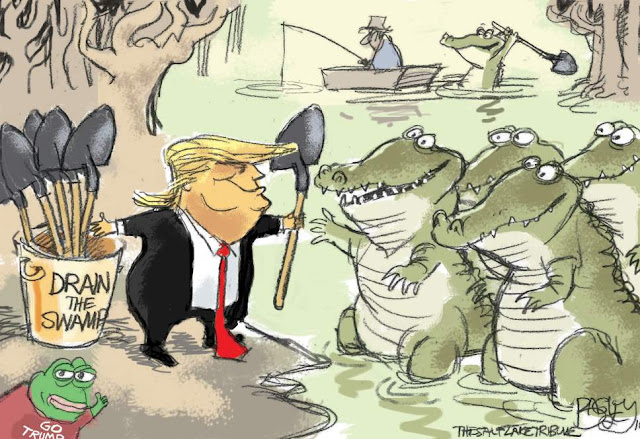 Posted by J.W. Williamson at 6/01/2017 07:14:00 AM
Email ThisBlogThis!Share to TwitterShare to FacebookShare to Pinterest
Labels: Donald Trump, Steve Bannon

Not until all politicians are extinct.

Along with their idiot supporters.

When you first read Wulf's comments they seem misguided and misinformed. Then the more you read his comments you realize he is just a damn fool!