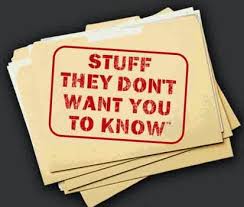 Okay, this happened back in January: Trump signed an Executive Order (read it here) that supposedly prohibited lobbyists and lawyers hired as political appointees from working for two years on government matters that involved their former clients. In the case of former lobbyists, they could not work on the same regulatory issues they had been involved in. This was part of Trump's promise to "drain the swamp."

But -- and here's where that drain got clogged -- Trump also reserved the right to issue waivers to the rule. Obama had a similar rule and also issued waivers to it. The difference between Trump and Obama is that Obama made the waivers public, with stated justifications, while Trump is keeping his dozens of waivers perfectly secret.

Not so fast there, says the head of the Office of Government Ethics, who sent a letter to every federal agency: "What former lobbyists are working in your department under an ethics waiver?"

Have you noticed that when Trump has something dirty to hide he tries to exert the power of his office to shut down inquiry? Yes. So Trump used Mick Mulvaney to send his own letter to the head of the Office of Government Ethics, demanding that he withdraw his request for copies of the ethics waivers.

The Ethics chief wasn't having it. He replied with his own blistering 10-page letter, which essentially said, "No, sir, I will not desist from tracking the ethical compromises being practiced in secret by the Trump administration."

Trump needs to hide the fact that his swamp is stagnating rather than draining, and he took the wholly unprecedented step of trying to bully the Office of Government Ethics. Thank God there are still government employees willing to stand up for ethics.

Posted by J.W. Williamson at 5/23/2017 07:52:00 AM
Email ThisBlogThis!Share to TwitterShare to FacebookShare to Pinterest
Labels: Donald Trump

Yawn. An article of congecture and inuendo. An over reach at best. Something I would epect to read in middle school English class.

Yawn. WW's comment is something that I would expect to read from a troll. I suppose in this day and age, they are everywhere. One of a troll's defining characteristics is that their comment masquerades as something clever while avoiding any substantive arguments to support their criticism.

Also, their comments usually contain gross misspellings and other grammatical errors. Their words do not even merit the effort to send them to the ash heap.