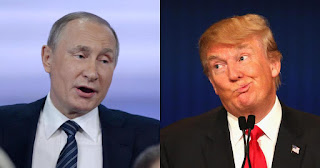 Reporters at the New York Times got hold of a "document" that recounts in print what was said in the May 10 Oval Office meeting between Trump and the Russians, a document whose accuracy the White House communications office does not dispute.

According to the written account of the meeting, Trump bragged to the Russians that he had gotten rid of a major hindrance to US-Russian relations -- FBI Director James Comey. “I just fired the head of the F.B.I. He was crazy, a real nut job,” Mr. Trump said to the Russians, according to the document, which was read to The New York Times by an American official. “I faced great pressure because of Russia. That’s taken off.”

Trump added, exhibiting more faith than a grasp of reality, “I’m not under investigation.”

So that should pretty much settle why Comey was fired: the Russian collusion investigation.

Meanwhile, the WashPost had its own piece of breaking news this afternoon: "The law enforcement investigation into possible coordination between Russia and the Trump campaign has identified a current White House official as a significant person of interest, showing that the probe is reaching into the highest levels of government, according to people familiar with the matter."

Trump must be thankful to be fleeing the country for the loving arms of the Saudis. But he can't stay gone forever.