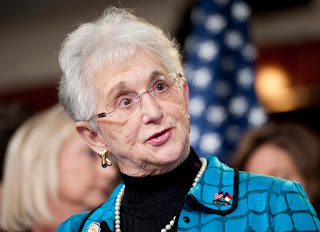 They say they've got the votes today -- finally -- to pass a partial dismantlement of Obamacare. Foxx will of course vote for it.

Obamacare requires insurers to accept all applicants and prohibits them from charging higher premiums because of a person’s ("preexisting") medical condition. At the insistence of conservative lawmakers who wouldn't vote for the first version of the bill, House Republican leaders agreed to let states apply for waivers allowing insurers to charge higher rates based on a person’s “health status.”

"The original version of the Republican repeal bill would have established a $100 billion fund that states could use to help people pay for health care and insurance from 2018 to 2026. House leaders added $15 billion last month to help insurers pay claims for their sickest customers," according to Thomas Kaplan and Robert Pear. Influential Republican lawmaker Fred Upton came out against the tweaked law because it didn't do enough "to protect the sick." At the last minute yesterday, Upton proposed an amendment adding $8 billion to the high-risk pool, which was accepted and which means that Upton and several other so-called moderate Republicans now support the bill, enough to pass it.

But talk about a shot in the dark! Upton's amendment does not specify who would be eligible for the high-risk pool money, how much of their costs would be covered, or how much they would be expected to contribute in premiums.

A shot in the dark, and who gets killed?

Plus how many states would apply for the waiver to throw people off insurance and into the high-risk pool? Texas will probably be first in line, according to Texas Rep. Joe Barton.

Not that Texas will ever have a chance at that waiver, because the Senate is not going to pass the law as it's been written in the House.

Posted by J.W. Williamson at 5/04/2017 08:25:00 AM
Email ThisBlogThis!Share to TwitterShare to FacebookShare to Pinterest
Labels: health care, Virginia Foxx

They should let Obamacare stay in place until it completely collapses.

Its rate of collapse is accelerating. When it's ended the government should put the un insurable under MediCare, enforce US law against price fixing and let the market handle the rest.

Feel free to weep, piss, moan or whatever gets you thru the might.

I do not understand the popularity of this woman. She will win again in 2018. It's astonishing.

I think people vote her in just to piss off JW.

Believe it or not, but I didn't vote for her.

So we're going to put the "uninsurable" into Medicare? And lower taxes at the same time? That's quite a trick, Wolf. Medicare has to pay the insurance claims for people, and Medicare is financed through a payroll tax. What is going to pay for these extra people you're putting into Medicare?