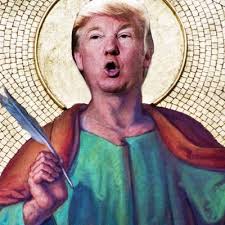 With fanfare and an excursion to the famous Rose Garden at the White House, Trump signed an Executive Order supposedly making it easier for churches to engage in political activity (as though they're not already doing it). But at least one Christian leader recognized the gesture as skim milk. Gregory S. Baylor, senior counsel for the faith group Alliance Defending Freedom, called it “disappointingly vague” and questioned whether the IRS would follow through with Trump’s directive.

Indeed, the IRS is bound by the law, not by Trump's pandering to pulpit-pounders. What is known as "the Johnson Amendment," written into the tax code, bans churches and other tax-exempt organizations from supporting political candidates. The provision would require an act of Congress to repeal. Trump can sign his "Executive Orders" all day long, and all evening too, but they don't change the law.

"Well, but," a Trump administration official said, trying to placate the Religious Right, the president was instead directing the IRS to “exercise maximum enforcement discretion of the ­[Johnson Amendment] prohibition.” But not according to the actual language contained in the EO that Trump signed: It merely instructs the administration not to take “adverse action” against churches or religious figures for political speech that has “not ordinarily been treated as participation or intervention in a political campaign” for or against a candidate for office.

Which is pretty much the way the IRS has already been letting various mega-church preachers get away with their political activity.

So the Rose Garden signing was really all a piece of theater to fool the Christians, whose support Trump must have, into thinking he's some sort of fellow traveler on the Road to Emmaus. But don't take my word as proof:

“Today’s executive order signing was an elaborate photo-op with no discernible policy outcome,” American Civil Liberties Union Executive Director Anthony D. Romero said in a statement. “After careful review of the order’s text we have determined that the order does not meaningfully alter the ability of religious institutions or individuals to intervene in the political process.”

Posted by J.W. Williamson at 5/05/2017 08:10:00 AM
Email ThisBlogThis!Share to TwitterShare to FacebookShare to Pinterest
Labels: Donald Trump, religion and politics