Tear Down That Wall Between Church and State!

Since 1954 exactly one church -- one -- has lost its tax exempt status because of political activity, the Landmark Church in Binghamton, N.Y. 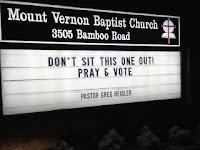 Plenty of churches have flaunted the Johnson Amendment for years and have done so with impunity, mainly because the I.R.S. doesn't have the staffing to investigate complaints and pursue legal action. Plenty of churches in Watauga County are partisan political enclaves and make no secret of it.

Can't see that the destruction of the Johnson Amendment will change anything, other than remove the fiction that Republican outposts operating under religious color deserve their tax-exempt status. And speaking of that tax-exempt status, we assume that too will be gone with the same wind that takes away a prohibition on purveying politics from the pulpit -- which, let's be honest, is honored more in the breach than in the observance anyway.

There are some rich churches with sprawling empires which might ought to be helping pay for the government that shields their ability to preach political partisanship to their pews full of parishioners.

Trump said at the National Prayer Breakfast earlier this week, “America is a nation of believers. The quality of our lives is not defined by our material success, but by our spiritual success.” Both sentences are true statements, but if you think either are accurate in describing our new Prez, you are maybe in greater need of prayer than the Johnson Amendment.

Trump is much more interested in the political fealty of those believers than he is in their spiritual success.

Posted by J.W. Williamson at 2/03/2017 11:23:00 AM
Email ThisBlogThis!Share to TwitterShare to FacebookShare to Pinterest
Labels: Donald Trump, religion and politics