Of all the journalistic inside information coming out of the Rollerball White House, no one has better or more granular sources than Glenn Thrush and Maggie Haberman. Their latest posting contains the following pieces of celestial light:

1. Trump is no workaholic. He quits the office about 6:30 p.m. and often watches TV into the night in his bathrobe, mainly alone, since Melania is in New York (and if we were her, we'd stay there). (Not attributed to Thrush and Haberman: The Donald-Melania marriage appears to be largely now a grudge match. She's afraid of him. He's contemptuous of her. We've seen it played out in living color, most especially on inauguration day.) 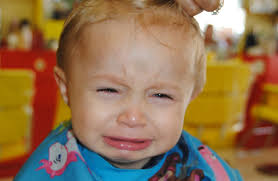 2. He watches TV compulsively, all day -- "too much in the eyes of some aides — often offering a bitter play-by-play of critics like CNN’s Don Lemon." And "he recently upgraded the flat-screen TV in his private dining room so he can watch the news while eating lunch." And this: "he almost always makes time to monitor Mr. Spicer’s performance at the daily briefings [on closed circuit TV], summoning him to offer praise or criticism...."

3. He did not know the full meaning of the executive order he signed making Steve Bannon a principal on his National Security Council (because he doesn't read and perhaps doesn't really know how to read). Steve Bannon likely wrote the order giving him access at the highest level to foreign intelligence.

4. Trump is obsessed with surfaces. "To pass the time between meetings, Mr. Trump gives quick tours [of the Oval Office] to visitors, highlighting little tweaks he has made .... He will linger on the opulence of the newly hung golden drapes, which he told a recent visitor were once used by Franklin D. Roosevelt but in fact were patterned for Bill Clinton. For a man who sometimes has trouble concentrating on policy memos, Mr. Trump was delighted to page through a book that offered him 17 window covering options."

5. If anyone's in charge in Trump's White House, it's Steve Bannon, the political hack with dozens of axes to grind. Reince Priebus, the nominal Chief of Staff, is neutered but keeps trying to reassert his authority over the flow of orders and initiatives. The chaos perfectly reflects Trump's cluttered, impulsive brainpan. A highly detailed and coherent staffing plan had been developed by Chris Christie before he was fired. That binder full of instructions got rude treatment -- "a senior Trump aide made a show of tossing it into a garbage can."

6. Trump can't stand the protests. He feels bunkered in the White House, without access to his adoring campaign crowds that made him feel like a man. He doesn't tolerate dissent: “ 'Did you hear that? This guy thinks [the first days of my presidency have] been terrible!” Mr. Trump said mockingly to other aides when one dissenting view was voiced last week during a West Wing meeting."

"Aides confer in the dark because they cannot figure out how to operate the light switches in the cabinet room."

Pretty much sums it up on so many levels.