Ret. Vice Adm. Bob Harward, a former U.S. Navy Seal, made it into the news yesterday when the Trump people announced that he would be replacing Michael Flynn as National Security Advisor (NSA). But then Harward rejected Trump's offer. That's exactly the way smart businessmen do business, no? Make a big public announcement about quarry not yet in the bag? Then this tweet followed last night from a reporter:

Jake TapperVerified account‏@jaketapper
A friend of Harward's says he was reluctant to take NSA job bc the WH seems so chaotic; says Harward called the offer a "shit sandwich."

But, no, "this administration is running like a fine-tuned machine," Trump assured us during that bizarre press conference yesterday.

Meanwhile, the fine-tuned machine delivers the information that Michael Flynn lied to the FBI about his conversations with the Russians (not that that's the reason he was fired). In the normal universe, lying to the FBI is a felony, but not of course in Rollerball World, especially not with the Alabama mush mouth as Chief Law Enforcer. 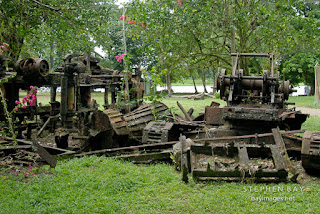 At the press conference yesterday, Trump also said this about Michael Flynn: "...what he did wasn't wrong -- what he did in terms of the information he saw. What was wrong was the way that other people, including yourselves in this room, were given that information, because that was classified information that was given illegally. That's the real problem."

Got that? The real crime was our finding out about the collusion with Russia. And if anyone were beginning to think that maybe Flynn acted alone, without Trump's knowledge, you can let go of that fantasy. A little later in the press conference, he returned to Flynn (like a dog to its vomit): "I don't think he did anything wrong; if anything, he did something right."

He was called out for repeatedly claiming his electoral victory last November was the biggest, the yugest, the most colossal in history, and what did he say when he was caught again in that lie: "Well, someone told me." That's the way this fine-tuned machine runs -- on rumors, tales, unverified non-facts.

"The leaks are real. The news is fake," Trump said yesterday. That's a puzzler, as one of the reporters pointed out yesterday: "If the information coming from those leaks is real, then how can the stories be fake?" Trump's answer to that, verbatim, opens a universe of unexplored personal paranoia and dysfunction:

You know what it is? Here's the thing. The public isn't -- you know, they read newspapers, they see television, they watch. They don't know if it's true or false because they're not involved. I'm involved. I've been involved with this stuff all my life. But I'm involved. So I know when you're telling the truth or when you're not. I just see many, many untruthful things.

He measures his own worth -- and everybody else's -- by "ratings," by how popular he thinks he is, by a wildly exaggerated electoral college win, by screaming adoration at mass rallies. We have a really sick narcissist running this fine-tuned machine.

Posted by J.W. Williamson at 2/17/2017 11:08:00 AM
Email ThisBlogThis!Share to TwitterShare to FacebookShare to Pinterest
Labels: Donald Trump, Michael Flynn