Turns Out, Donald Trump Is the Pussy 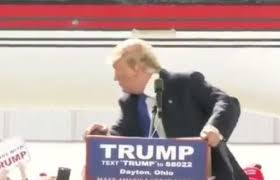 He came back from his meeting with the president of Mexico still bragging that he was going to force the poor man to pay for The Wall. But the truth is, he choked and didn't evenbring it up. That's Donald J. Trump to a T ... big-talking braggart, who, stripped of his trappings, ends up a dried prune.

Mere hours after his historic election, Trump had decided that he wouldn't want to repeal all of Obamacare. "That was just campaign talk." Just talk. That's what every male pussy in the history of the universe has been good at.

“This whole idea that he was an outsider and going to destroy the political establishment and drain the swamp were the lines of a con man, and guess what — he is being exposed as just that,” said Peter Wehner, who served in the administrations of Ronald Reagan and George Bush before becoming a speechwriter for George W. Bush. “He is failing the first test, and he should be held accountable for it.”

That big beautiful famous Wall? More talk. James Woolsey, a former CIA director and a prominent swamp creature on Trump's transition team, told CNN (presumably speaking for Trump), "I don’t think we ought to fall on our sword about the difference between a wall and fence. Maybe this will be cheaper because it’s mainly fence, but it’s a good fence." Hahahaha! Well, maybe a good silt fence.

Trump is finding out just how woefully unprepared he is, just how much he does not know, and hence just how totally dependent on Washington insiders he is and therefore weak. Instead of challenging Republican legislative leaders, he'll be their bitch.

Posted by J.W. Williamson at 11/12/2016 10:11:00 AM
Email ThisBlogThis!Share to TwitterShare to FacebookShare to Pinterest
Labels: Donald Trump

I would prefer we stop using the dismissive gendered talk about "pussy", "wuss," "does your husband play golf?" etc., as synonyms for weakness; but I know that in the even recent past I have made such references. I'll do my best J.W., how about you?
Oh dear Jesus, just struck by the hated label of "political correctness."

You act as if you did not know that Trump has consistently said that he would want to keep the preexiisting condition provisions in a replacement plan.

Did you really not know? Or are you just trying to make it look as if he is inconsistent?

Hey Jerry, was that you I saw screaming at the camera in the video out of Portland ?

Jw, what have you been smokin? Trump and the Republican Congress are going to emasculate the Affordable Care Act and make the southern border much more secure with a wall and other means. And while he's at it, he's going to repeal most of Obama's Executive Orders and roll back a number of onerous regulations promulgated by this Administration. And if you think a Trump Administration won't reverse the current Administration's LGBT locker room guidance, then you really must be smokin some powerful hallucinogen.

Progressives may gain control of the federal government again some day, but it won't be anytime soon.

News Update from Canada
The flood of Trump-fearing American liberals sneaking across the border into Canada has intensified in the past week. The Republican presidential campaign is prompting an exodus among left-leaning Americans who fear they'll soon be required to hunt, pray, pay taxes, and live according to the Constitution.

Canadian border residents say it's not uncommon to see dozens of sociology professors, liberal arts majors,
global-warming activists, and "green" energy proponents crossing their fields at night.
"I went out to milk the cows the other day, and there was a Hollywood producer huddled in the barn," said southern Manitoba farmer Red Greenfield, whose acreage borders North Dakota. "He was cold, exhausted and hungry, and begged me for a latte and some free-range chicken. When I said I didn't have any, he left before I even got a chance to show him my screenplay, eh?"

In an effort to stop the illegal aliens, Greenfield erected higher fences, but the liberals scaled them. He then installed loudspeakers that blared Rush Limbaugh across the fields, but they just stuck their fingers in their ears and kept coming. Officials are particularly concerned about smugglers who meet liberals just south of the border, pack them into electric cars, and drive them across the border, where they are simply left to fend for themselves after the battery dies.

"A lot of these people are not prepared for our rugged conditions," an Alberta border patrolman said. "I found one carload without a single bottle of Perrier water, or any gemelli with shrimp and arugula. All they had was a nice little Napa Valley Cabernet and some kale chips. When liberals are caught, they're sent back across the border, often wailing that they fear persecution from Trump high-hairers.

Rumors are circulating about plans being made to build re-education camps where liberals will be forced to drink domestic beer, study the Constitution, and find jobs that actually contribute to the economy.
In recent days, liberals have turned to ingenious ways of crossing the border. Some have been disguised as senior citizens taking a bus trip to buy cheap Canadian prescription drugs. After catching a half-dozen young vegans in blue-hair wig disguises, Canadian immigration authorities began stopping buses and quizzing the supposed senior citizens about Perry Como and Rosemary Clooney to prove that they were alive in the '50s.
"If they can't identify the accordion player on The Lawrence Welk Show, we become very suspicious about their age," an official said.

Canadian citizens have complained that the illegal immigrants are creating an organic-broccoli shortage, are buying up all the Barbara Streisand CD's, and are overloading the internet while downloading jazzercise apps to their cell phones.

"I really feel sorry for American liberals, but the Canadian economy just can't support them," an Ottawa resident said. "After all, how many art-history majors does one country need?

Now that Trump has been elected, with the liberal invasion now happening, Canada is considering building a border wall to stop this as last resort.

Retro - yeah, that was funny when it came out 16 years ago. Most of us are have a little trouble being quite so glib about the current rise of white supremacism.

Yes, Opinionated. Those damned free elections! We must find a better way! Perhaps we can get the DNC to pick our president? Sort of like how they picked the "winner" of the Dem primary?