The End of Political Correctness

Trump Nation. The following represents a fraction of the incidents reported by national media since November 8: 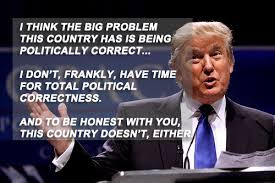 —The words “fuck niggers” and “Trump” were painted on a car belonging to former University of Tennessee football player Chris Weatherd.

—A note reading “Gay Families = Burn in Hell” and “Trump 2016” was placed on a car in North Carolina.

--Strangers told an Indian-American Google employee it’s “time to get out of the country Apu” while he was filling his car at a gas station.

—A swastika, the words “Sieg Heil” and reference to Trump were painted across a Philadelphia storefront.

—A swastika and the words “Make America White Again” were painted on a wall in a Wellsville, NY park.

—The words “#FuckNiggers,” #FuckAllPorchMonkeys,” and Donald Trump’s name were painted across a student of color’s locker in a Maple Grove, Minn., high school.

—A group of students carrying Trump signs chanted “White Power” through the halls of the the York County School of Technology in York, Pa.

—Four white men allegedly threatened a black woman, asking her “how scared are you now, black bitch?” in Delaware.

—A Muslim woman was reportedly threatened by Trump supporter armed with a knife at the University of Illinois.

—Latino high school students were told “you wetbacks need to go back to Mexico” in Salt Lake City.

—Trump supporters parked a pickup truck outside a house for students of African descent at Wellesley college, and jeered residents with pro-Trump slogans.

—KKK recruitment fliers reading “Get off the fence, whitey” were distributed in Birmingham, Ala.

—A black doll with a noose around its neck was found in an elevator at Canisius College in Buffalo, N.Y.

—“Niggers die here” was scrawled across a bus stop in Grand Island, N.Y., alongside drawings of nooses.

—“Trump” was written on the door to a room used by Muslim students for worship at New York University.

—Students handed out “Deportation” letters to their classmates of color at Shasta High School in Redding, Calif.

—A LGBTQ flag was lit on fire in Rochester, N.Y.

—An anonymous note left for a Muslim high school teacher in Gwinnett County, Ga., explained that her headscarf “isn’t allowed anymore” and suggested she hang herself with it instead.

—Administrators in Wesley Chapel, Fla. are investigating reports that a teacher told a group of black high school students, “Don’t make me call Donald Trump to get you sent back to Africa.”

—The words “Heil Trump” and a swastika were painted across a church in Bean Blossom, Indiana.

—An Indian-American family’s car was defaced with the word “Trump,” scratched into its side.

—A man in Natick, Mass., received a threatening letter which cited Trump’s electoral victory and stating that the town has “zero tolerance for black people.”

—“Kill Kill Kill Blacks” was written on the bathroom wall of an elementary school in Silver Spring, MD.

—”White Power” was written across the front door of a black woman’s apartment in Des Moines.

—A white man told a black woman in Hamilton, Ontario that he hopes Trump “cleans up the whole of North America,” and that “you all shouldn’t even be here, you’re murderers and killers, you’re running around killing everybody, I hope he gets rid of all of you.”

—Students in a Miami-area high school were disciplined after bringing a confederate flag to school. At least one student was photographed in his school uniform, with the flag, and a Donald Trump hat.

Posted by J.W. Williamson at 11/17/2016 10:36:00 AM
Email ThisBlogThis!Share to TwitterShare to FacebookShare to Pinterest
Labels: Donald Trump, homophobia, racism

Who is writing this? You really need to get your facts straight! The Democrats are the party of racism. #Hillarysamerica

So, what planet do you live on?

So no blacks or hispanics said or did anything threatening to whites on Nov 8th?

I submit that the press reported what you posted because it is:

2. Selected incidents to fit their own agenda.

Of course, we know for certain that all of these alleged incidents have been confirmed by the appropriate authorities. And we're sure that Trump supporters were responsible for all of these incidents, or at least the ones that actually occurred, .

And one other thing that is obvious: Those protestors in Portland who defaced public facilities with obscenities and who vandalized private autos and police vehicles were demonstrating against Donald Trump's election. In other words, they were not Trump supporters.