When Power Knows No Bounds: Republicans Intend to Nullify the Election of a Supreme Court Justice 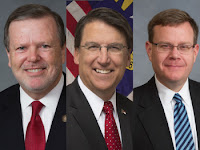 Edmunds was the Republican backed by big corporate donors. The Overlords in the General Assembly -- Phil Berger in the Senate and Tim Moore in the House -- had tried to save Edmunds by changing the election law in that race alone to a plebiscite vote, so that Edmunds would not have to face an actual challenger. The Berger-Moore law change would have put Edmunds on the ballot by himself. Voters would be asked to choose "Yes" or "No."

That innovation got overturned as unconstitutional by a specially appointed three-judge panel, and that decision was subsequently upheld by a tied NC Supreme Court. The high court voted 3-3 to uphold the three-judge panel, mainly because Bob Edmunds had to recuse himself from the case.

Edmunds lost last Tuesday, bigly (54.45% to 45.55%). Now Berger-Moore, with the willing participation of also defeated Governor McCrory, intend to pack the Supreme Court in a special session next month with two more Republican judges before McCrory has to pack his bags and leave.

Mark our words: They will do it. Because they can. And because they do not care what anyone thinks. They only care about ensuring that the unconstitutional laws they pass will get a stamp of approval from the state's Supreme Court.

Roosevelt tried to do that and he was shot down. There must be case law.