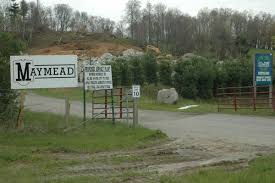 Judge John O. Craig III of High Point heard what's become known as "the Maymead case" all day Monday and part of the morning today. At the adjourning of court, the judge said it was a "fascinating" case, well presented and well argued, and he planned to have a decision by the end of the week. Or possibly next week.

Judge Craig has handled some high-profile cases and is well respected. He struck me as attentive, smart, skeptical, and fair. He announced up front on Monday that he knew nothing about the case and had never before handled an appeal of a quasi-judicial board's decision. That was a signal for the lawyers to pitch in and educate the judge. (Verily, I was edified too. )

How will Judge Craig rule? Dunno and won't guess.

The Maymead case has amassed a file of over 5,000 pages. That's mainly the record of the 60 hours of testimony in front of the Watauga Board of Adjustment (BOA), which overturned County Planning Director Joe Furman's revocation of an asphalt permit claimed by Maymead Materials of Mountain City, Tenn. It's a complicated case with a multitude of moving parts.

One of the prime issues of law: Whether the Watauga BOA erred in assuming that "Johnny Hampton" and "JW Hampton Co." were legally the same entity. Johnny Hampton as an individual applied for and got the asphalt permit. JW Hampton Co. now claims ownership, which they also now claim to have sold to Maymead.

The JW Hampton Co. first leased and then sold some acerage to Maymead. In none of those conveyances is an asphalt permit mentioned as part of the lease or as part of a bill of sale. Maymead's lawyer argued that the company wouldn't have paid $1,600,000 for the property without the permit (and poo, said Maymead's lawyer, on the "gotcha technicality" of no explicit, written transference of ownership of the permit).

Johnny Hampton is the minority owner of JW Hampton Co. His daughter owns 51% of the stock and is the CFO. The JW Hampton Co. is a excavation and grading contractor, the biggest in Watauga County. The plaintiffs in this case ("petitioners") -- trying to stop the Maymead Asphalt plant -- maintain that the Hampton Company and Maymead cannot qualify for "vested rights," which the BOE found to be the case, no matter how much they've spent, because neither ever legally owned the permit.

The plaintiffs contend that Maymead and JW Hampton Co. are therefore "third parties," insofar as "third parties" can not earn vested rights. Vested rights are based on a substantial expenditure of money by the owner of the permit prior to any revocation. Jamie Whitlock of Asheville, the attorney for the plaintiffs, said he could find no case in North Carolina of vested rights accruing to a third party, nor did opposing counsel for Maymead produce one.

Mr. Whitlock also argued that the expenditures Maymead and JW Hampton Co. claimed as accruing toward vested rights were almost entirely for the crushing and recycling business as well as the grading business of JW Hampton Co., not progress toward building an asphalt plant, which Mr. Hampton, by his own admission, had abandoned until Maymead came along in mid-2014.  And since Maymead only leased the correct land in May of 2015, a month before the permit revocation, they had no time to (and did not)  accomplish any vesting.

Plaintiffs also contend that the BOA erred in another "finding of fact" -- that there had been substantial progress made on the building of the asphalt plant  -- in the form of a major expenditure of money -- four years after the issuance of the permit by Joe Furman. Judge Craig questioned the county's right to abruptly revoke the permit, in light of the failure of the Watauga County High Impact Land Use ordinance (HILU) to specify a process for revocation, a time-line to establish "lack of progress," and the grounds for revocation. Stacy C. Eggers IV ("Four") argued persuasively that the Hampton standard of performance -- no appreciable, visible progress toward an asphalt plant after four years -- was valid grounds for revoking the permit. In fact, at the time of the revocation, Maymead had not shown that it had actually leased the land for which the proposed site plan for an asphalt plant had been submitted.

The HILU asphalt permit was granted to Johnny Hampton on June 20, 2011. In June 2015, Watauga County development officer Joe Furman revoked the permit -- "given the evidence that he had available at the time" -- because of no appreciable progress toward an asphalt plant. Some dirt had been moved (5% - 7% of what would have to be moved for the plant to operate, according to expert testimony given before the BOA). According to lawyer Eggers, Mr. Furman had every right to revoke the permit.

Jamie Whitlock for the plaintiffs referred to "the fictions" of Johnny Hampton that the Watauga BOA had relied on to rule in his favor -- a "narrative" constructed to explain away secret dealings done to avoid public scrutiny. The lawyer for Maymead, Mr. Tim Terrell of Greensboro, countered that the revocation of the permit had been the result of political pressure. Mr. Terrell wanted the judge to believe that a different standard of doing business prevailed in Watauga, where things aren't necessarily spelled out in writing (like the conveyance of an asphalt permit). Johnny Hampton did business on a handshake. (I believe Mr. Terrell was saying that mountain people aren't too observant of legal niceties and have "no filter" when "just talking," like when giving testimony to the BOA. The "benefit of the doubt" would therefore need to be paid, Mr. Terrell argued.)

Lawyer Terrell for Maymead repeatedly returned to this as his bedrock: the Watauga BOA, after 60 hours of extreme attentiveness, heard all the testimony and the same arguments that Judge Craig is hearing now and still voted that Mr. Furman had no right to revoke the permit. That struck me as a thin reed for heavy logic to lean on, since this whole trial is about the BOA's alleged "irrational" findings of fact in the case. Just because the BOE bought Maymead's argument doesn't prove anything.

As noted in the post, this is an extremely complicated case. A couple of minor points - it is Tom Terrell (not Tim) - he is a very accomplished attorney. And as I understand it, prior to the permit revocation, Maymead never purchased land - they are LEASING the site that they will transform into a high impact site; they purchased equipment used in JW Hampton's recycling/crusher business. They then asserted that the purchase of materials/equipment/assets used in an existing business proved significant investment in the development of an asphalt plant.

We've all heard "land use permits follow the land." In this particular case, Maymead claimed that a lease for one site was sufficient to transfer a HILU permit associated with another piece of property that they only leased months later. I have no idea how the BOA bought that argument, but they did.

The county planner was right to revoke the permit - and, as the county attorney noted in this hearing, he had the authority to do so. According to testimony of Maymead witnesses, outside of some very minimal grading, there was NO progress made by JW Hampton toward the development of an asphalt plant.

It is unclear how a Watauga County HILU permit can be purchased, particularly using a transaction that does not include the permitted site; there is nothing in the HILU ordinance that allows for such a transaction and the receipt for this transaction did not even include the permit. The BOA's hastily deliberated ruling allows an owner to obtain a HILU permit, make no progress toward the development of an asphalt plant, then sell just the permit years later for millions of dollars, regardless of the development that has occurred around that site and without even including the permitted land in the transaction. The permit, in effect, becomes the vested interest and exists into infinity and can be sold without any say by the county.

This is a complex land use case, with unusual circumstances surrounding the transfer of an old permit the county had revoked for lack of progress. It is appropriate that it is heard in a court of law. I appreciate all that the Henions have done to protect Watauga County from industrializing the 421 Scenic Byway using a permit with so many legal questions surrounding it.

Jerry, it is rare that I agree with you but I do want to commend you for your reporting on this issue. Good job on laying out the facts and explaining the issues.