Some of the actual transcript below from Debate # 2. 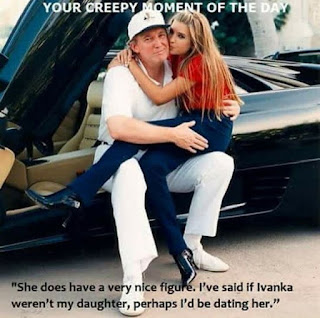 Anderson Cooper honed in. Do you understand, Mr. Trump, that what you said -- mere "locker room banter," you claim -- described actions that would constitute sexual assault?

Trump's response: It was locker room banter ... and then his quick detour into the world of ISIS and terror. What's the connection in Trump's mind? "You know when we have a world where you have ISIS chopping off heads and...." If you look closely at the word salad that follows, you'll notice that the dependent clause "when you have a world where" never gets to a main clause. What was he trying to say? Was it pure deflection? "You bring up that tape, Anderson, and I'll distract everybody with the horrors of terror." Was that his ploy?

Or is he suggesting that Anderson Cooper, along with all the Republican leaders and just regular citizens who've been appalled at what the "pussy" tape revealed about the character of the presidential nominee -- was he suggesting that questioning The Star Who Is Trump about such things is giving aid and comfort to the enemy?

But, yeah, nobody respects women more than you, Donald. You bet!


COOPER: The question from Patrice was about are you both modeling positive and appropriate behaviors for today's youth. We received a lot of questions online, Mr Trump, about the tape that was released on Friday as you can imagine. You called what you said locker room banter. You described kissing women without consent, grabbing their genitals. That is sexual assault. You bragged that you have sexually assaulted women. Do you understand that?

TRUMP: No, I didn't say that at all. I don't think you understood what was said. This was locker room talk. I am not proud of it. I apologized to my family. I apologized to the American people. Certainly I am not proud of it. But this is locker room talk. You know when we have a world where you have Isis chopping off heads and ... frankly drowning people in steel cages. Where you have wars and horrible, horrible sights all over. Where you have so many bad things happening. This is like medieval times. We haven't seen anything like this, the carnage all over the world. And they look and they see. Can you imagine the people that are frankly doing so well against us with ISIS. And they look at our country and see what's going on. Yes I am very embarrassed by it. I hate it. But it's locker room talk and it's one of those things. I will knock the hell out of ISIS. We're going to defeat ISIS. ISIS happened a number of years ago in a vacuum that was left because of bad judgment. And I will tell you, I will take care of ISIS. And we should get on to much more important things and much bigger things.

COOPER: So for the record you're saying you never did that

TRUMP: Frankly ... You hear these things are said. And I was embarrassed by it. But I have tremendous respect for women and women have respect for me.

COOPER: Have you ever done those things?